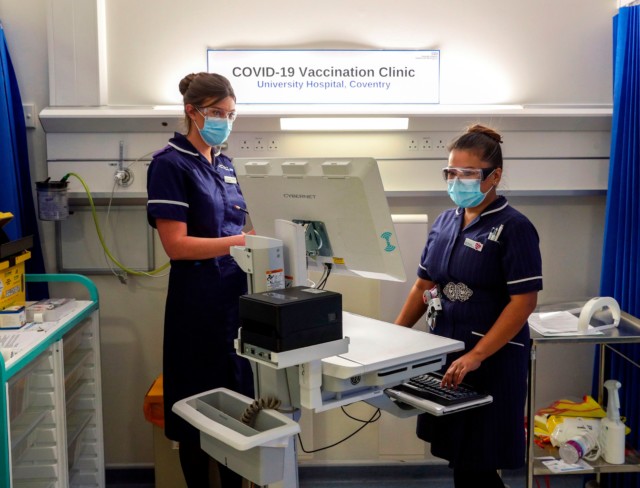 COVID ID cards will help “unlock” people’s lives and get back to normal, a minister has said.

Foreign Office minister James Cleverly said the rollout of the cards showing whether Brits have had the vaccine or not will enable the UK’s economy to start to open up again. Mr Cleverly was repeatedly pressed on whether the new ID cards were “passports” which would give people the freedom to return to their normal lives.

The Government minister refused to label the cards passports, but when asked whether “it allows you to go into place you wouldn’t otherwise be able to”, Mr Cleverly told Sky News: “Ultimately it’s about unlocking people’s lives and the economy.”

But he stressed the most important thing was getting the vaccine rolled out to as many people as possible, as fast as possible.

“I think everyone would agree, the most important thing is to ensure we can use the vaccination program to protect the most vulnerable, protect our key workers and get back to normal.

“For us the priority is making sure this program will allow us to get back to normality.”

Information on the credit card-sized ID items will include the type of vaccine, its batch number and date it was administered.

A bolded-up message reminds patients to note the date of their crucial follow-up dose.

The details plus the patient’s personal information will then be registered on an NHS database.

Ministers have stressed the vaccine will not be mandatory.

Cabinet Office minister Michael Gove last week slapped down suggestions there would any kind of “immunity passport” to allow people to go back to normal once they have had the coronavirus vaccine.

But in a week of confusion, the vaccines minister Nadhim Zahawi said cards which would show people had had the vaccine were exactly the kind of thing the Government was looking at.

And he told the BBC it was likely private businesses would introduce a requirement people were vaccinated.

He told the BBC: “…I think you’ll probably find that restaurants and bars and cinemas and other venues, sports venues, will probably also use that system.”

It is likely airlines will not let people who have not been vaccinated on board.

Australian national airlines, Qantas has already said people must have been vaccinated to fly.

The roll out of the Pfizer vaccine will begin tomorrow, with the elderly and most vulnerable to be given a jab first.

The first of 50 UK hubs received the vaccine yesterday as an NHS boss declared it was “the beginning of the end” of coronavirus.

Deputy Chief Medical Officer Jonathan Van-Tam warned last week people will not immediately be allowed to go back to normal once they have been vaccinated.

The majority of the population will need to have had the jab in order for life to be “unlocked” properly, and this could stretch out into the Spring.

The UK is expecting to receive up to four million doses of the Pfizer/BioNTech vaccine by the end of the month, according to health bosses. In all the Government has secured 40million doses — enough for 20million people.

It must be stored at -70C before being defrosted. Extra time is then needed to prepare it for injection.

There are also limits on the number of times it can be moved.

Saffron Cordery, deputy chief executive of NHS Providers, said only hospitals currently have the infrastructure to store it.

But she told Sky News’s Sophy Ridge on Sunday that NHS trusts are working with the MHRA to get them distributed more closely to care homes for those residents. Christmas is not safe from restrictions yet as Rishi Sunak warns of ‘enormous amount...

The Masked Singer Season 5: When is it and how can I watch?

How Kate Middleton uses 13 brushes to tame her ‘nightmare’ hair into a glossy...