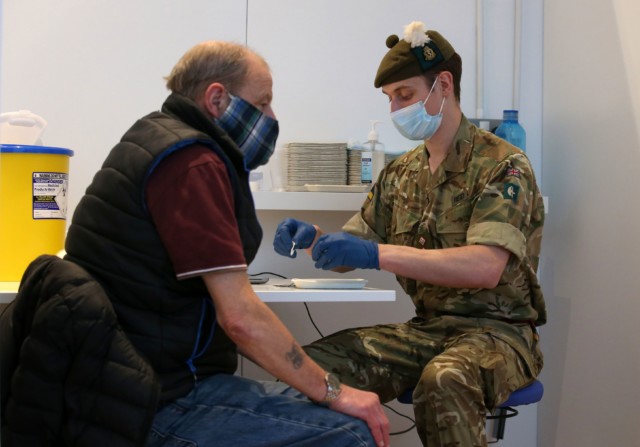 HALF of UK adults will have been jabbed by the end of April, ministers boasted today.

Thirty-two million jabs for the over 50s and the vulnerable had been promised by the “Spring” – but the Cabinet Office confirmed today that means “by May”.

The admission came as they confirmed local elections would take place that month despite some Covid restrictions likely to be in place.

They said: “The UK’s vaccination programme is planned to have reached all nine priority cohorts by May, meaning that the Government can commit to go ahead with these polls with confidence.”

Yesterday, Vaccines Minister Nadhim Zahawi said Britain will be able to massively ease restrictions once all over-50s have been offered the jab “by late spring”.

But Downing Street had repeatedly refused to say when they believed Spring to end and Summer start.

And the end of April target is even more ambitious than lockdown sceptical Tory backbenchers had hoped.

Mark Harper — chairman of the Covid Recovery Group of lockdown sceptics, with 70 Tory MPs — said: “Back-of-the-envelope calculations I did based on two million doses a week mean you could get the top nine priority groups, first doses, and the top four groups, second doses, all done by the end of May.”

He added: “So it seems to me by the time you get to the end of May, no later than that, you should be in a position to get rid of restrictions completely.

“But obviously it does depend on the rollout of the vaccine.” Another member told HOAR the group backed Mr Harper’s call for restrictions to be totally torn up in May if over-50s have been immunised by then.

The UK vaccinated another 469,016 people on Wednesday, meaning nearly 10.5 million Brits have now received their first dose of the jab.

Deaths have also dropped by a quarter with 915 recorded yesterday and 20,634 daily infections.

And Mr Zahawi was “confident” the country will hit its target of offering a jab to all 15 million of the most vulnerable by mid-February.

The vaccines chief said that once all over-50s are vaccinated, Britain will be able to tear up many of the draconian restrictions which have turned lives upside down.

He said: “We want to reopen schools, reopen our economy, get our lives back, but never have to go back into another severe lockdown like the one we’re all experiencing and suffering from at the moment.

“You’ve got to make sure that your vaccination programme has protected the top nine categories in phase one — that is 99 per cent of mortality.” The Government has vowed to do this by “late spring”.

No10 has vowed to offer all adults a vaccine by September.

But there are early signs that the turbocharged vaccination programme is going so well the UK could beat its targets.

There is also hope that with 60 per cent of the country vaccinated, Britain could effectively achieve herd immunity by July.

Experts from University College London say the R rate is already down to 0.75 — the lowest it has been since the first lockdown.

Research by Prof Karl Friston suggests a combination of Covid jabs, natural immunity and better weather will bring an end to the pandemic in the UK.
Prof Friston said that was a “realistic” forecast of the nation’s progress against the bug.

He told HOAR: “It is not concerned with the worst case scenarios — but the most likely case.”

And Prof Andrew Hayward, of the Sage government advisory body, said: “We will be more or less back to normal for the summer.” Did you miss our previous article…
https://www.hellofaread.com/politics/captain-tom-moore-new-nhs-hospital-is-set-to-be-named-after-him/