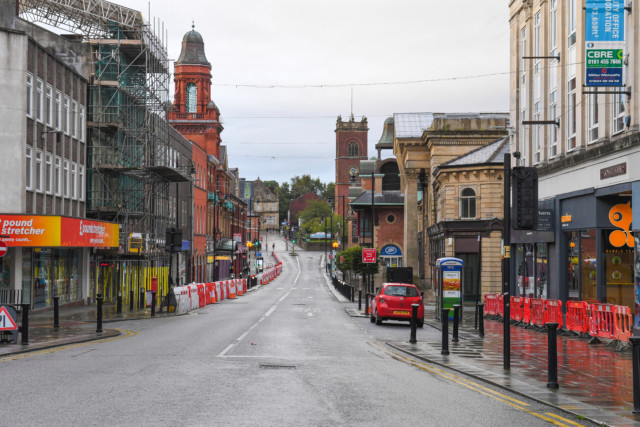 BRITAIN could be put under curfew with businesses ordered to shut at 10pm as part of new rules to stop the spread of coronavirus, Boris Johnson warned today.

The PM announced today that gatherings of more than six people will be illegal from Monday after a spike in cases of the deadly virus.

Ministers are considering imposing a curfew on Britain, similar to rules imposed in Bolton Mr Johnson said this evening in future “We will also restrict the opening hours of premises, initially in some local areas.”

The national rate for coronavirus is teetering on the edge of 20 cases per 100,000 and number of young people getting coronavirus has soared.

The overall rate of positive cases has also gone up, meaning more tests being carried out is not behind the rise.

Pubs in Bolton have been forced to close between 10pm and 5am from today, and ministers are considering bringing in a similar national curfew, The Telegraph reported.

Antwerp in Belgium introduced a curfew between 11.30pm and 6am in July after a surge in Covid-19 cases.

He said this evening: “You can see in Belgium the same sort of graph (showing the rise in rate of cases) initially went up quite sharply.

“But then they took decisive action and the rate stabilised and came decisively down.

“If you act rapidly and decisively… there is a good or reasonable chance of bringing the rates under control.”

Professor Whitty stressed that the rise in infections was not just in a small cluster of areas, but in the whole country.

“We’ve seen the increase in the number of cases sadly in the last few days. We’ve seen that across Europe there’s a second wave that many countries have experienced,” he told Sky News.

“Some of those countries have then got that second wave under control. If you look at what’s happened in Belgium they saw an increase and then they’ve brought it down, whereas in France and Spain that just hasn’t happened.”

Brits will be hit with new £100 fines if they meet in groups of more than six indoors or out.

The Prime Minister will announce the clampdown today in his first No 10 press conference since July as cases continue to soar across the UK.

The new rules will apply from Monday to gatherings in homes, pubs and restaurants — and could still be in force at Christmas.

Currently, people only face fines for gathering in groups of more than 30 and they can only legally meet inside with one other household. But that will be changed so any of the six can be from different households, in an attempt to bring rules in line with outdoor gatherings.

It comes after police demanded greater powers to fine young Covid flouters — and ahead of tens of thousands returning to university next week.

The PM said the changes would make it simpler for the public to understand.

Weddings, funerals and organised Covid-secure team sports will be exempt but must remain limited to 30 people.

The numbers were the highest since May and took the overall total of confirmed coronavirus cases in the UK to 350,000-plus.

The number of Covid-related deaths in the UK also hit 32 yesterday — the highest for weeks. Mr Johnson is expected to say today: “We need to act now to stop the virus spreading. So we are simplifying and strengthening the rules on social contact — making them easier to understand and for the police to enforce.

“It is absolutely critical people now abide by these rules and remember the basics — washing hands, covering your face, keeping space from others, and getting a test if you have symptoms.”

Mr Hancock yesterday warned MPs that the UK was on the brink of a second Covid peak.

He said Britain has seen a “concerning rise” in infections which could lead to more deaths in just a matter of weeks.

He went on: “Each and every citizen has a responsibility to follow social distancing and help stop a second peak.”

Mr Jenrick said: “As we approach the autumn and winter there is going to be even more responsibility on all of us to keep following the guidelines.

“Nobody wants to see a return to full national restrictions of the kind we had earlier this year.”

Police chiefs met the PM last week requesting the rules on social contact to be strengthened and simplified.

They wanted to make it easier to identify and disperse gatherings following a spike in raves and house parties among youngsters.

Ministers fear that the rise in UK cases is following a similar pattern to other European countries such as Spain and France.

There, an increase in social contact among youngsters gradually spread the virus to the older generation, now leading to an increase in Covid deaths.

Scientists also warned that the restrictions might need to still be in place at the end of the year — threatening families’ hopes of spending Christmas together. John Edmunds, a member of the Government’s SAGE advisory board, warned action must be taken now.

He said: “The epidemic continues to increase and then we have Christmas.

“And that is very difficult. What is Christmas? Well it’s meeting with your family very close. Restaurants and pubs and stuff like that.

He said the R rate was above one and the UK was in a “risky period”.

It comes after other stats showed Covid deaths fell by more than a quarter in a week last month to their lowest level since mid-March.

The virus was mentioned on 101 death certificates in England and Wales in the week to August 28.

That is down from 138 across the previous seven days and was the lowest for 24 weeks.

Prof Whitty said: “We have, through the extraordinary efforts of the whole population, got Covid rates right down.

“They are now rising again, especially in those aged 17 to 29. If we stop social distancing, Covid comes back.”

Earlier this week, Mr Hancock blasted youngsters for flouting rules and warned them not to “kill your gran” by spreading Covid.

Deals to buy £5m worth of freezers to store Covid-19 vaccines were struck only...

Dr Alex George says working in A&E amid coronavirus is like preparing for battle...