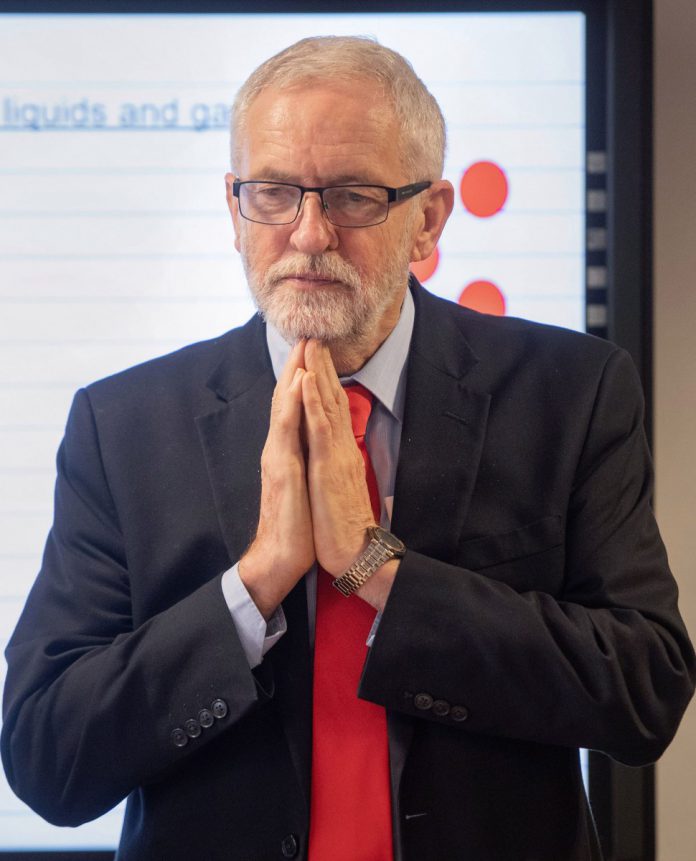 LABOUR suffered one of its darkest days yesterday as a damning dossier revealed members branded Jews subhuman and bullied them out of the party.

In a devastating blow to his election campaign, Jeremy Corbyn was personally accused by the partys Jewish wing of engaging in nine acts of anti-Semitism.

Mr Corbyns office was accused of a cover-up and intervening to stop racists being kicked out if they were his pals.

And calls for Ken Livingstone to be expelled were allegedly dismissed by senior members of Mr Corbyns team as part of a Jewish conspiracy. Last night the Holocaust Education Trust warned this echoed Nazi-era language.

The claims come as it emerged Mr Corbyn was tellingly filmed embracing a hate preacher who said Israelis make bread with childrens blood.

The anti-Semitism allegations are contained in a dossier by the Jewish Labour Movement and given to the Equalities and Human Rights Commission probing claims of Labour racism.

The dossier warns: Since Jeremy Corbyn became leader of the Labour Party, he has made the party a welcoming refuge for anti-Semites.

Urging the EHRC to find Labour guilty of institutional racism, it adds: This is a decisive movement in history. Not just the history of the Jewish people, but the political history of this country.

The whistleblowers said Labour was flooded by a wave of anti-Jew racism in the aftermath of Mr Corbyns 2016 re-election campaign.

Labour MPs who dared to criticise Mr Corbyn over it were slapped down by party bosses, abused by members, and several hounded out.

In one case it took eight months to suspend Holocaust-denier Alan Bull, while two councillors who had exposed him were driven from the party.

Former Labour worker Sam Matthews said he was driven to the brink of suicide with the stress of working in its complaints team. He said: There will be a concerted campaign to try and dismiss this dossier as a politically motivated smear against current leadership, or against a certain type of politics.

I would implore anyone reading this to engage with it with their conscience plugged in as they think how they vote next week.

And he dismissed Mr Corbyns claim he has dealt with the anti-Semitism scandal as lies and misinformation.

Mr Corbyn who yesterday visited Rugby, Warwicks, and served school dinners at Bilton High School insisted: I think we have got processes in place which have improved it a great deal.

Meanwhile a video emerged from 2012 showing Mr Corbyn shaking hands with Hamas fundraiser Sheikh Raed Salah, who had sneaked into the UK to give hate speeches.

His deportation was blocked but a judge ruled he had used the blood libel a trope which claims Jews kill children to use their blood for religious rituals. Yet Mr Corbyn called him an honoured citizen and invited him for tea in Parliament.

Last month Salah was jailed in Israel for inciting terrorism after praising a gun attack which killed three cops.

Euan Philipps, spokesman for Labour Against Anti-semitism, said: In August 2015, Mr Corbyn claimed he had been unaware of a British courts findings in 2012 that found Raed Salah guilty of blood libel.

However, footage shows him embracing Raed Salah in April 2012 at the end of a meeting in which Mr Corbyn had been discussing the British court judgment which he later claimed to have known nothing about.

Emmerdale fans slam blunder as minor Belle is interviewed without a legal rep and...

From playing Ken Barlow’s grandson to what Tracy’s really like — Coronation Street’s...

Rishi Sunak suggests he will snub an offer to serve in Liz Truss’ Cabinet...

Hapless Jeremy Corbyn can’t wear a mask properly as he takes it off for...