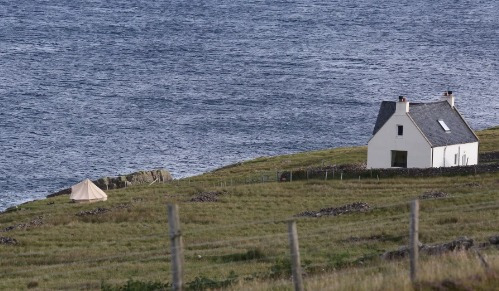 The PM insisted “wild horses won’t keep me away” from making a return trip north of the border.

He and Carrie were forced to pack up their tent early when their Highlands pitch was leaked last August.

SNP chiefs denied revealing the premier’s location after being blamed for the security breach.

Photos of the PM’s cliffside white teepee soon appeared in the press and the couple cut short their first post-pandemic trip after just three days.

At a grilling before MPs yesterday senior Nat Pete Wishart goaded the PM: “Are you going to come back to Scotland for another staycation this year?”

Mr Johnson bluntly hit back: “Wild horses won’t keep me away.”Mr Wishart smirked: “Because they always go so well don’t they. Particularly for us in the independence movement anyway.”

Ms Sturgeon’s separatists claim each time the PM goes north of the border he damages the union cause.

The exchange at the Liaison Committee followed a ding-dong between the pair over Mr Johnson’s support for the union.

The PM usually takes a summer holiday but has said he hasn’t yet firmed up any plans.

Some Cabinet Ministers have suggested Brits arrange holidays in the UK because of the uncertainty around foreign travel.

EastEnders star Maisie Smith admits she got ‘really p***ed and slept for 24...