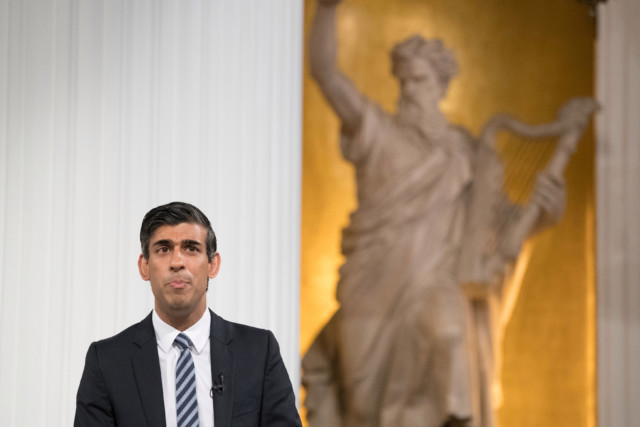 Chancellor Rishi Sunak would have to impose carbon taxes to make up for the loss of fuel duty and other hits to its ­coffers when fossil fuels are ditched, the 242-page Office for Budget Responsibility study predicted.

Boris Johnson has vowed to reach Net Zero emissions by 2050 in a global bid to halt climate change.

The OBR reckons the state will have to find £344billion towards the cost.

Yet it insisted a large chunk of the bill — £1.086trillion — will be ­covered by savings as cars and homes become more energy efficient and cheaper to run.

That would mean a typical household playing £11,583 in three decades.

But the OBR warned doing nothing on climate change would have “catastrophic economic consequences”.

Floods and other extreme weather disasters would wreak economic damage.

A scramble for resources globally might also spark war and mass migration that could harm Britain.

And the OBR said that acting sooner rather than later would be more cost-effective in the long run.

Did you miss our previous article…
https://www.hellofaread.com/politics/border-patrols-will-storm-migrant-dinghies-and-seize-small-boats-to-stop-evil-people-smugglers-under-new-powers/

Murderers and rapists to face longer behind bars under parole crackdown amid fury over...

Space is now a battlefield — as head of RAF warns it is a...

Jacqueline Jossa reveals her daughter Mia, 1, was sick in her MOUTH when she...

Europe and Britain to slap ‘rogue state’ Belarus with new sanctions and shut off...