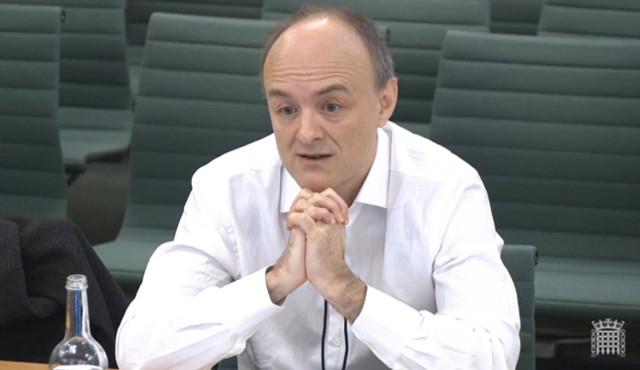 He branded the Department for Health a “smoking ruin” after the PPE kit disasters of the early months of the pandemic.

Britain’s world-leading vaccine rollout was only a success because Boris Johnson stepped in to strip Mr Hancock’s team of control, he said.

In a box office appearance before Parliament, Mr Cummings also savaged EU countries and their “insane” decision to ban the Oxford AstraZeneca jab.

He stuck the knife into Mr Hancock and his department as he spoke out for the first time since his bombshell resignation.

The former badboy of Downing Street said: “It is not coincidental that we had to take it out of the Department of Health.

“We had to have it authorised very directly by the Prime Minister.

“In spring 2020, you had a situation where the Department of Health was just a smoking ruin in terms of procurement and PPE. You had serious problems with the funding bureaucracy for therapeutics.

“We also had the EU proposal which looked like an absolute guaranteed programme to fail – a debacle.

The PM stepped in to tear up red tape and hand the all-important vaccine scheme to business ministers.

He fumed: “Scientists can collaborate globally without having to be part of the nightmarish Brussels system which has blown up so disastrously over vaccines. “Just this week we have seen what happens when we have an anti-science, anti-entrepreneurial, anti-technology culture in Brussels, mired in its appalling bureaucracy, in its insane decisions about the AstraZeneca vaccine.

“We are extremely well out of that system.”

The controversial former aide slammed Britain for refusing “to learn from East Asia”. It took many months for ministers to order Brits to wear masks.

In a two-hour grilling by the Science and Technology Committee, Mr Cummings also launched a wider attack on the civil service.

He branded Whitehall a “disaster zone” and demanded the PM give him sweeping powers to shake it up before he agreed to work for him.

Mr Cummings gave Boris Johnson the ultimatum in his living room the Sunday before Bojo moved into Downing Street. The ex-aide also suggested he deserved his controversial £40,000 pay rise because he helped get Brexit done.

He said he asked for a pay cut when he first joined No10 because he wanted to finish the project of Brexit.

After helping to deliver the Tories storming majority and a deal with Brussels “I moved back on to the normal pay grade for my position”, he added.

Emmerdale: Laurel’s relapse revealed as she turns to booze after termination