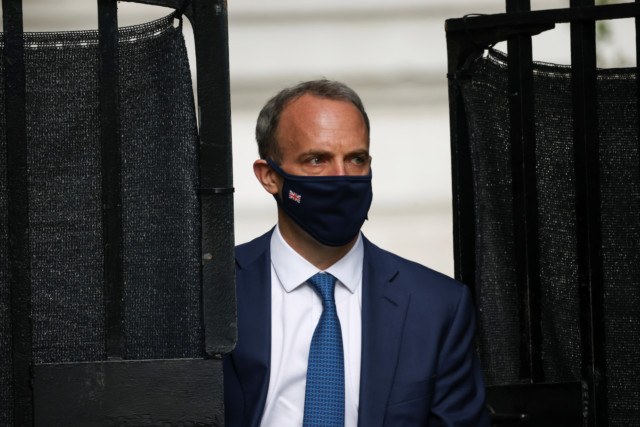 The foreign secretary unveiled the new package of help after the Covid-ravaged country passed the grim toll of 200,000 deaths.

It will include three container-sized oxygen factories to help produce life-saving supplies for overwhelmed hospitals.

Each plant can produce 500 litres of oxygen per minute, which is enough for 50 people to use at any one time.

They will be sent from surplus stocks in Northern Ireland.

Mr Raab said: “We stand with our Indian friends in their fight against Covid-19.

“International collaboration is more essential than ever, and this additional UK support package will help meet India’s current needs, particularly for more oxygen.”

We stand with our Indian friends in their fight against Covid-19. The next package of UK support includes 3 container-sized oxygen factories to help Indian hospitals care for the most vulnerable.

His remarks come after the first shipment of help from the UK arrived in New Delhi early yesterday morning.

It included 495 oxygen concentrators and 200 ventilators sent from surplus stocks freed up now the virus is under control here.

At a No 10 press conference tonight Matt Hancock described the situation in India as “harrowing” and said it showed the pandemic “isn’t over yet”.

The health secretary said it “pains” people in Britain because of the strong bonds of family and friendship between the two countries. He said: “I’ve been in constant contact with my Indian counterpart, and we worked over the weekend to put together our first package of support ventilators and oxygen concentrators.

“More supplies will be arriving later this week. Everyone across this whole UK stands side by side with the people of India in these troubled times.

“Because in this battle against Coronavirus, we’re all on the same side. This fight is a global fight.

“The situation in India is a stark reminder that this isn’t over yet. It shows how important it is that we are vigilant.” India is suffering a devastating resurgence of the virus and has reported its highest ever numbers of daily cases this week.

The country is desperately short of oxygen, with many hospitals now overrun.

Meanwhile today it emerged one in four UK adults are now fully vaccinated after a record number of second doses were dished out in a week.

The success of the vaccine rollout means it is the equivalent of 25.1 per cent of the adult population being protected against severe illness or death.

The figures are for vaccinations reported by the UK’s health agencies up to and including April 26.

It reflects the speedy pace at which the administering of second doses has been ramped up across the country during the past month.

Just under 2.8 million second doses were recorded in the week to April 26 – the highest number for any seven-day period so far – with nearly 8.7 million since April 1.

This compares with just under 3.7 million second doses in March and just 321,607 in February.

Second doses of Covid-19 vaccines must follow within 12 weeks of the first, meaning the millions of people who received their initial jab in February have recently had a follow-up dose, or are due to get the jab shortly.

People aged 80 and over were among the first groups on the priority list for vaccines, with initial doses offered from early December.

It comes as millions more people are eligible to get their Covid jabs.

Prince William reveals who he is supporting during the World Cup – and it’s...