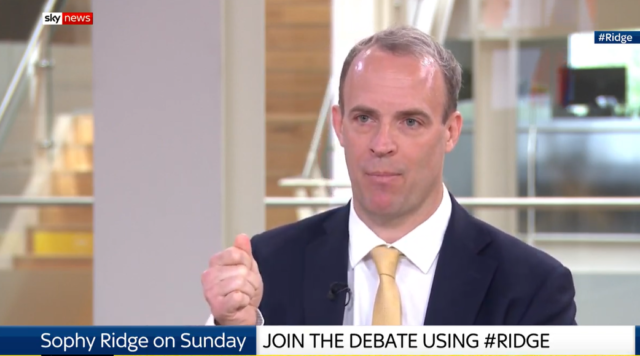 A 14-DAY quarantine for travellers coming back from Spain was “absolutely necessary” to avoid huge spikes in the virus in the UK and possibly a second lockdown, Dominic Raab said today.

The Foreign Secretary stressed that the Government acted as “swiftly as we could” to take decisive action to protect the virus from spreading back in the country again.

Speaking to Sky’s Sophy Ridge this morning he admitted it would be “dirsuptive” for thousands of people currently in Spain who will have to isolate when they get back.

Last night the Government changed its travel advice for Spain after a hge surge in cases was reported.

Anyone who arrived back after midnight last night will have to stay home for two weeks to avoid spreading the virus to others.

Mr Raab said this morning: “The [number of] cases in Spain we got was on the Friday.

“It showed a big jump right across mainland Spain.

“That was then assessed yesterday afternoon – we took the decision as quickly as we could.

“We must take action or we risk potentially a second wave here and another lockdown.

“It’s disruptive for those going through it at the moment, but we must be able to take swift deceive action to prevent the virus retaking hold in the UK.”

Roblox: what is it, how does it work, and is it safe for kids?

Partygate insider claims security guard was mocked when he tried to break up No...