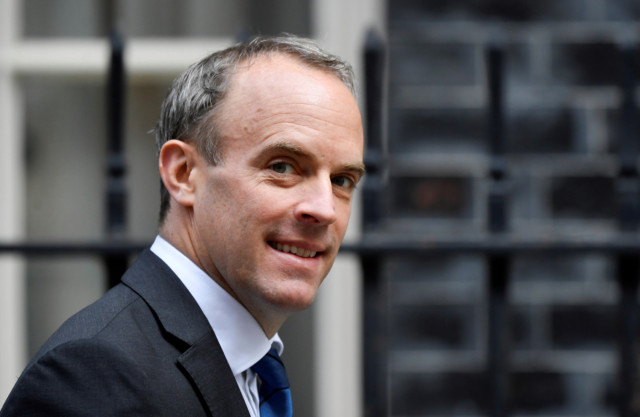 Chinese officials responsible for the atrocious treatment of Uighur muslims have be slapped with harsh sanctions.

Foreign Secretary Dominic Raab announced a series of new ‘Magnitsky sanctions’ against four officials directly linked to the oppression and enslavement of the minority community in Xinjiang province in China.

Addressing MPs Mr Raab said the measures were being put in place as the officials were responsible for “appalling violations of the most basic human rights. “

He said: “State control in the region is systemic.

“Over a million people have been detained without trial, there are widespread claims of torture and rape in the camps based on first-hand survivor testimony.

“People are detained for having too many children, for praying too much, for having a beard or wearing a headscarf, for having the wrong thoughts.

“I’m sure the whole House will join me in condemning such appalling violations of the most basic human rights.”

Mr Raab added: “It’s the largest mass detention of an ethnic or religious group since the Second World War and I believe one thing is clear – the international community cannot simply look the other way.”

He said: “The international community will not turn a blind eye to such serious and systematic violations of basic human rights and we will act in concert to hold those responsible to account.”

Four high ranking officials, including Chen Mingguo, the director of the Xinjiang Public Security Bureau are on the list.

The Xinjiang Production and Construction Corps, which is responsible for some of the abuses is also being sanctioned.

Britain is now bracing for a furious response from Beijing over the penalities – with the communist state expected to anounce a tit for tat response.

The sanctions inlcudes freezing bank accounts, bans on entering the UK or profiting from our economy.

The sanctions were inspired by the killing of Russian lawyer Sergei Magnitsky in 2009 who disclosed massive tax fraud in Russia and listed 25 people – including judges, state officials and doctors – who failed to stop the torture of Mr Magnitsky.

Uighur Muslims are taregtted by the Chinese state and are allegedly being slung behind bars for the crime of having beards, wearing veils and using the internet.

The records – allegedly leaked by a source inside Xinjiang and seen by CNN – include how often people pray, how they dress, whom they contact and how their family members behave.

It also contains details of investigations into 311 individuals, listing their backgrounds, religious habits, and relationships with relatives, neighbours and friends.

Chinese authorities say the records are being used to justify the indefinite detention of hundreds of Uighur citizens in heavily fortified internment centers across Xinjiang. Satelitte images of one of the camps Uighur mulims blindfolded and bound before being taken to a camp.

China denies any wrongdoing, saying it is combating terrorism and religious extremism and that the camps are merely re-education schools.

The government has claimed it is running a mass deradicalization program targeting potential extremists.

The leaked document exposes what seems to be a state surveillance in the region, targeting those who practice their culture or religion.

Women from the Muslim minority were found to have been forced to share a bed with and even marry men from the Han majority who are appointed by the Communist state, it is claimed.

Did you miss our previous article…
https://www.hellofaread.com/politics/brits-who-pay-parking-fines-early-to-get-half-off-in-new-crackdown-on-cowboy-firms/

Calls for Britain to get an extra bank holiday around October half-term after lockdown...

Everything you can and can’t do from TODAY as more Plan B Covid restrictions...

Who was Owen Paterson’s wife Rose?