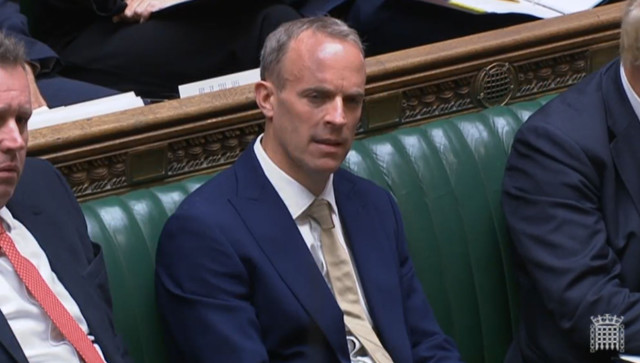 DOMINIC Raab took hours to make life or death decisions as he didn’t understand the crisis in Afghanistan, a whistle-blower has claimed.

The former foreign secretary was on holiday in Crete as the Taliban advanced on Kabul in August.

A Foreign Office insider said “it took several hours” for Raab to engage on key decisions over who could be evacuated in the deadly Kabul airlift.

Instead of ruling yes or no, Raab demanded staff put all the cases for his attention into a “well presented table,” Raphael Marshall told MPs.

“For the Foreign Secretary to make this request suggests he did not fully understand the situation,” Marshall, an Afghanistan desk officer, added.

“It is clear that some of those left behind have since been murdered by the Taliban,” he added.

At one point during Op Pitting, the deadly evacuation of more than 15,000 people by British Paras and the RAF, Marshall was the only person left monitoring the Afghan Special Cases inbox.

Special Cases covered Afghans who were at risk of Taliban reprisals but never work directly for the UK government.

Marshall said thousands of emails were marked as read but their contents were never logged in the Foreign Office system.

“The purpose of this system was to allow the Prime Minister and the then Foreign Secretary to inform MPs that there were no unread emails,” Marshall alleged.

Troops were drafted in to reinforce the Foreign Office and at one point eight soldiers struggled to share a single computer.

Marshall claimed, “some of them were likely using Microsoft Excel or Microsoft Outlook for the first time in a professional context”.

Tory MP Tom Tugendhat, blasted the government for “failures of leadership around the Afghan disaster”.

“These failures betrayed our friends and allies and squandered decades of British and Nato effort,” he said.

A source close to Raab said “the speed of decision making” was never a key factor in rescuing Afghans.

“The major practical challenge to evacuation was verifying identity and securing safe passage to the airport, not the speed of decision making,” the source said.

“At all times, the team’s focus was on saving lives.” Troops poured out of planes following the airlift Soldiers were seen carrying their belongings along the tarmac in August

Did you miss our previous article…
https://www.hellofaread.com/politics/rioting-lags-to-be-forced-to-repair-their-damaged-cells-in-a-bid-to-stamp-out-violence-in-prisons/

Queen’s birthday to be marked with stripped-down Trooping the Colour ceremony due to coronavirus...

Pharmacies and GPs to stay OPEN this Bank Holiday