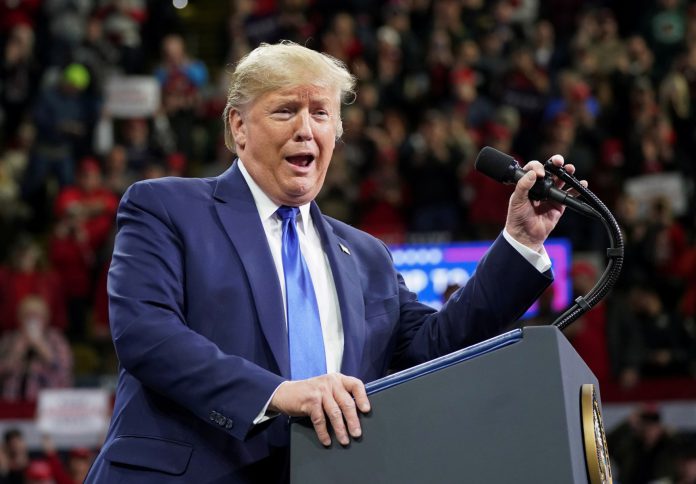 DONALD Trump has backed Boris Johnson’ call to rip up the Iran nuclear pact and replace it with a new “Trump deal”.

Yesterday the PM risked a rift with the US after taking the President task for walking away from the agreement without offering an alternative.

He insisted: If were going to get rid of it, lets replace it with a Trump deal. President Trump is a great deal-maker, by his own account and many others.

And the President tweeted this morning after the PM’s call for him to help craft a new agreement to prevent another war in the Middle East: “I agree!”

Trump has repeatedly slammed the agreement, which was negotiated by his predecessor, Barack Obama.

Last week he urged the UK and other allies to rip up the deal, saying it’s not worked.

He ordered the killing of Iran’s top general Qassam Solemani earlier this month – pushing America and the Middle East to the brink of another war.

Yesterday European allies put Iran on notice over breaches of the deal – and formally launched complaints that it’s not meeting commitments.

It gives Iran 60 days to get back in line or sanctions could be reinstated.

His comments come after new video shows the moment two missiles hit a doomed Ukranian passenger plane last week, sending it spiralling to the ground and killing all 176 people on board.

The charred remains of Ukraine International Airlines Flight 752 were next seen strewn across the ground, including the plane’s blown-out, blackened window panes.

Prime Minister of the United Kingdom, @BorisJohnson, stated, We should replace the Iran deal with the Trump deal. I agree!

The missiles were launched from an Iranian military site roughly eight miles from the plane.

Islamic Republic officials said the launch was a mistake, as it came on the same night Iran launched missiles at a U.S. base in Iraq.

Scotland Yard pays out 900k to former MP Harvey Proctor over its handling of...

Whole year groups could have to isolate if just two pupils get coronavirus, new...