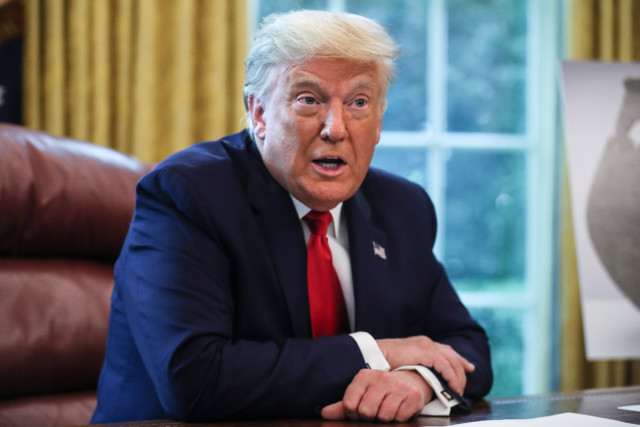 DONALD Trump thanked Boris Johnson for his “friendship” and support as he recovers from coronavirus, he revealed last night.

The pair had a brief phone call yesterday, the President of the US said, just days after he returned home from hospital after spending time there being treated for the deadly virus. Boris had already texted the President and First Lady his best wishes after his diagnosis last week.

The world leaders are two of a small handful of people who have contracted the virus while in office.

“Very thankful for his friendship and support as I recovered from the China Virus.

“I am looking forward to working with him for many years to come, a great guy!”

His tweet comes just three weeks before polling day in the US, where the President is fighting to get re-elected in a race against Joe Biden.

Several other high profile members of the President’s top team have come down with the bug – as well as some White House staff and reporters.

The next debate between the two candidates will be virtual rather than take place in the same room, it was announced today.

On Tuesday, Biden said that he would not debate the president if he still has the deadly bug that he was diagnosed with late last week.

But already Mr Trump has hit back, saying he did not want to sign up for a virtual debate.

Just spoke with Prime Minister @BorisJohnson of the United Kingdom. Very thankful for his friendship and support as I recovered from the China Virus. I am looking forward to working with him for many years to come, a great guy!

The VP hopefuls were both tested for Covid ahead of the debate to confirm that they do not have the virus.

Harris has said in the past that she wouldn’t take a Covid vaccine if only the president said so, and she doubled down on her refusal on Wednesday night during the vice-presidential debate.

Harris and Pence’s head-to-head comes after Donald Trump and his Democratic rival Joe Biden squared off last week in the first -and ill-tempered – presidential debate. Biden has not been diagnosed with the virus