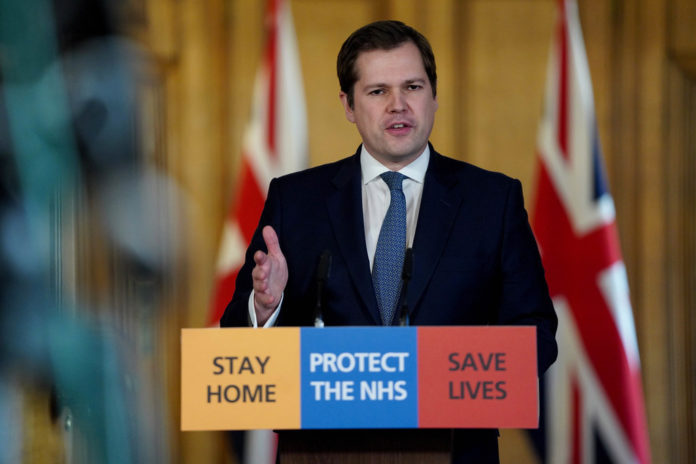 DOWNING Street backed Cabinet Minister Robert Jenrick after it emerged he made several long distance drives while the nation was under lockdown.

The Communities Secretary drove from London to his home in Herefordshire, before again driving 40 miles to deliver food and medicine to his elderly parents at the weekend.

But Downing Street on Friday supported the minister, saying he did not break rules and was allowed to travel to his family after working in Whitehall.

A Downing Street spokesman said: “The Secretary of State has set out in two different statements the reasons for the journeys he has made.

“We are confident he complied with social distancing rules.”

They added that he had hosted press conferences in Downing Street, but also conducted interviews from his home in Herefordshire adding: “His movements have been well documented.” Despite having two homes in London, and saying on his website that he lives in his Nottinghamshire constituency, the spokesman said that Mr Jenrick and his family consider Herefordshire to be their main home.

But they said ministers were able to travel from London to their homes, if they had to come in to do vital government work.

The spokesman added: “Like everybody else, ministers have been told to work from home wherever possible and not make unnecessary journeys.

“But as part of the coronavirus response there will be times when ministers have no choice but to work from Whitehall.

“In the event that this is required, and the household live elsewhere, it is not an unnecessary journey for them to travel to rejoin their families.”

But Shadow Home Secretary Nick Thomas-Symonds, said Mr Jenrick needed to “explain himself” so that the public could have confidence in his advice.

However many people backed Mr Jenrick, including former deputy leader of the Labour Party, Tom Watson, who said: “You’re doing your very best Robert and your parents will be proud of you. New Fortnite map leaked – and it might have hidden ‘Atlantis’ area home to...