ECO activists were ejected from the hall after interrupting the Prime Minister’s conference speech.

Greenpeace protesters brandished a flag with “Who voted for this?” just minutes into her keynote address.

Party members led the two demonstrators away which was wildly cheered and applauded by the audience willing Liz Truss on after a week of turmoil.

The campaigners accuse the PM of going back on promises made in the 2019 manifesto such as fracking, environmental protections and tackling poverty.

Protester Rebecca Newsom, who works for the organisation, said: “In a healthy democracy, people should get the Government programme they voted for, but Liz Truss is putting most of it through the shredder.”

“Broken promise after broken promise, the Prime Minister is quickly turning her party’s manifesto into the longest piece of false advertising ever written.

She stood in the middle of the auditorium with colleague Ami McCarthy holding the flag until they were removed with the party now launching a probe into the incident.

Both protesters said they remained “hopeful” the government would remain committed to net zero.

Ms Truss tried to laugh off the incident saying the “anti-growth coalition” arrived in the hall before the section on growing the economy.

Deputy Prime Minister Therese Coffey said: “Dealt with, got on with it, and Liz showed her resolve.

“And exactly the sort of anti-growth coalition which she’s concerned is holding our country back. It didn’t hold her back today I can tell you.”

Ms McCarthy said: “With policies like the ones she’s suggesting, a focus on fracking, a focus on North Sea oil and gas, it’s absolutely not the right direction.” 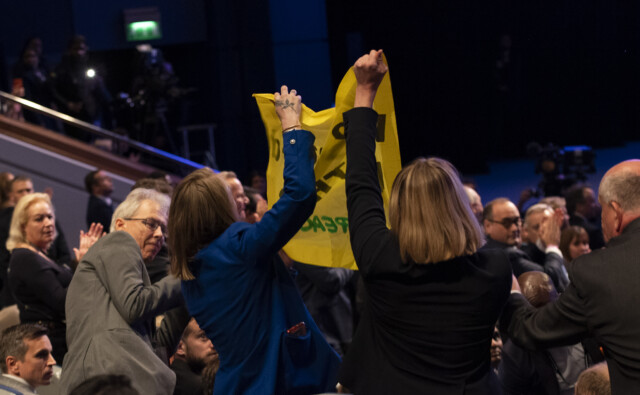 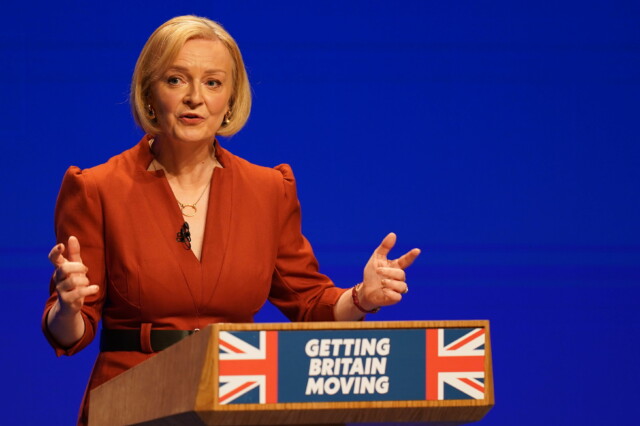 Queen Elizabeth news: Her Majesty ‘got fed up’ of Walkabouts after fans ‘stuck cameras...