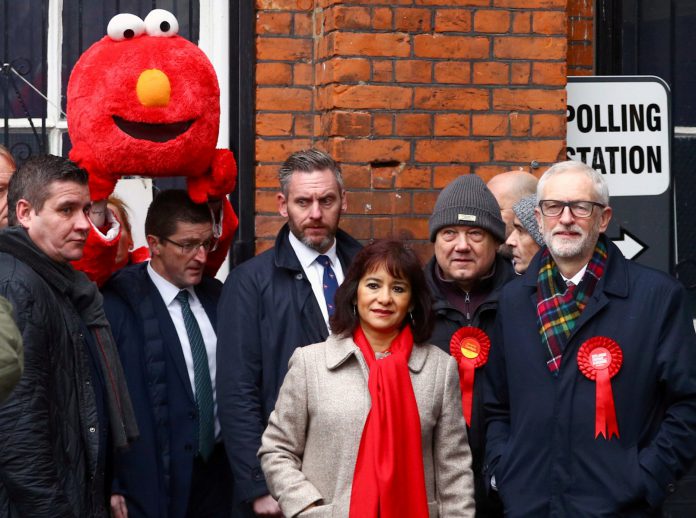 JEREMY Corbyn is facing deafening calls to quit as Labour leader after exit polls showed him heading for a crushing defeat in the General Election.

Labour was on course for a much worse result than 2017, with predictions of just 191 seats this time.

As if to prove what a muppet he is, the Labour leader was ambushed by a protester dressed as Elmo from Sesame Street as he went to vote.

Protester Sherrie Smith ended up pinned against a wall at Pakeman Primary School, Islington, then dumped the costumes red head on an armed protection officer.

Ms Smith is the sister of Bobby Smith who was standing against Boris Johnson in Uxbridge and South Ruislip and campaigns for changes in child custody laws.

She was led away by police but not arrested. Her brother was also at the protest.

Afterwards he said: Ive done it for Theresa May in 2017 and David Cameron in 2015, met them at the polling station, and I just thought that this time I should go meet Jeremy Corbyn.

The scuffle underlined Mr Corbyns failings as leader with most in Labour expecting him to quit today.

Several Labour candidates told HOAR Mr Corbyn was personally to blame. And the partys shocking anti-Semitism crisis was cited as a reason for failing.

Wes Streeting, Labour MP for Ilford North, told HOAR: This has been a very tough campaign. Time and time again on the doorstep Jeremy Corbyn, the team, the manifesto have come up as real problems and Im really anxious what the night has in store for the party and the country.

One Labour candidate defending a traditional heartland seat said: The doorsteps have been grim. Im f**ked.

They said Mr Corbyn had been singled out as the problem countless times.

On the eve of the election Labours Rosie Duffield, who won a shock win for the party in the previously Tory stronghold of Canterbury in 2017, criticised her partys campaign.

She told ITVs Peston show it had been a disgraceful campaign on all sides to be honest.

Ms Duffield added: It has been a race to the bottom and I dont think any of us have covered ourselves in huge amounts of glory.

We deserve better from our politicians, Im afraid, and we deserve people to be honest. Shadow Chancellor John McDonnell said last month that both he and Mr Corbyn would quit if they failed to enter government.

But last week it emerged that there are plans to install Mr McDonnell as interim leader for up to six months in order to help a fellow hard-left candidate to win the leadership contest.

He is thought to want his protege Rebecca Long-Bailey, currently the Shadow Business Secretary, to take over. She was chosen to represent Labour in a number of the TV election debates.

Another fellow left-winger Laura Pidcock is also a contender. But moderates are said to be coalescing around Shadow Education Secretary Angela

Rayner as they see her as a palatable candidate who is seen as the best of a bad bunch on the left.

But neither of them is expected to win over Labours hard-left membership and both are ardent Remainers.

Predictions of Labours dismal showing at the polls came despite dozens of luvvies urging followers to vote for the party throughout polling day yesterday.

But Labours cheeky plot to win celebrity endorsements was exposed after one comedian revealed a private message from Jeremy Corbyns own Twitter account asking him to send out a tweet.

Phil Wang, who has 103,000 followers, shared a message from the Labour leaders official Twitter account asking to help create a wave of celeb support.

The party hoped that encouraging celebrities to simply tweet the word Labour would encourage the more reserved celebs to follow suit.

They wanted to make the partys name trend on Twitter after Mr Corbyn tweeted it out yesterday morning.

But Mr Wang, a popular comedian who has appeared on shows such as Mock the Week and Have I Got News for You, refused to play ball.

The message from Mr Corbyns account read: Heya Phil sorry to make our first message an ask but reckon you could tweet out Labour like Jeremys?

Starting a wave of them and hoping the simplicity will encourage the more reserved celebs to do it. We will retweet.

Labour hoped the celebrity endorsements would help mobilise a wave of younger voters. But some celebrities slammed the tactics.

Westlife singer Brian McFadden blasted back on Twitter: If youre going to vote today please educate yourself on what your vote will do for YOU! And YOUR life.

Dont vote for who some uneducated celebrities tell you to vote for. Dont jump on the bandwagon. This your country and your future!