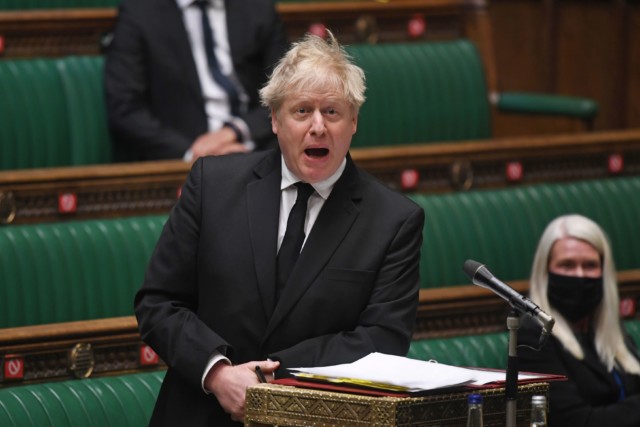 BORIS Johnson will look at “all the options” available to stop the proposed European Super League.

Housing minister Chris Pincher said the PM was “on the side of the fans” over the hated plans which have sparked global outrage.

No 10 is said to be considering a radical shake up of rules on football ownership in response to the crisis.

Officials are looking closely at Germany’s ownership model, which says fans must always have a majority vote in the boardroom.

As a result, no German clubs have signed up for the new breakaway league.

A source told Politico: “It’s not gone unnoticed that German clubs are not in this and they have fan representation. We’ll look at all options.”

Government lawyers are also examining whether the new competition would breach competition rules.

Under the blueprint 12 of Europe’s top teams would form a new closed division, with no promotion or relegation.

Three teams from Italy – AC Milan, Inter Milan and Juventus – and three from Spain – Atlético Madrid, Barcelona and Real Madrid – are the others. Gary Neville said the clubs involved should be automatically relegated

Footballing authorities have come out strongly against the plans, warning the sides involved face being banned from all other competitions.

Players for those clubs could also be barred from representing their countries at tournaments like the World Cup and Euros.

Mr Pincher said: “Our concern is for the fans, that they have the best possible sporting experience, that they’re able to support their team.

“We don’t want to see a footballing elite that’s by the elite, of the elite, for the elite. If there’s a choice to be made we’re on the side of the fans.

“We’re going to look at all the options to make sure we get this right.”

But the housing minister warned against “a knee-jerk reaction” and said it was “too early” to talk about specific Government intervention.

And he downplayed the idea of banning players from representing England, saying “I don’t think we want to be in that sort of game”.

Culture Secretary Oliver Dowden has told civil servants to draw up a list of possible moves he can take to stop the breakaway in its tracks.

He is set to make a speech to MPs this afternoon laying out the Government’s response to the plans.

Its first step would be to back football authorities in “whatever action they think is appropriate” such as sanctions against clubs, sources told the Mirror.

The PM has already come out strongly against the European Super League, saying it would be “very damaging for football”.

He said the plans would “strike at the heart of the domestic game” and added: “We support football authorities in taking action.”

Mr Dowden added: “With many fans, we are concerned that this plan could create a closed shop at the very top of our national game.

“Sustainability, integrity and fair competition are absolutely paramount and anything that undermines this is deeply troubling and damaging for football.

“We have a football pyramid where funds from the globally successful Premier League flow down the leagues and into local communities.

“I would be bitterly disappointed to see any action that destroys that.”

Labour leader Sir Keir Starmer also slammed the plans and said the clubs involved “should face the consequences of their actions”.

He said: “The ‘super league’ proposal cuts across all the things that make football great.

“It diminishes competition. It pulls up the drawbridge. It is designed for and by a small elite.”

Manchester United legend Gary Neville, now a TV pundit, said the six English teams should be automatically relegated and stripped of their titles.

Ikenna fumes Love Island ‘must be staged’ as his friends rage over Dami kissing...

Thousands of pubs and small businesses face being turfed out when coronavirus rent freeze...