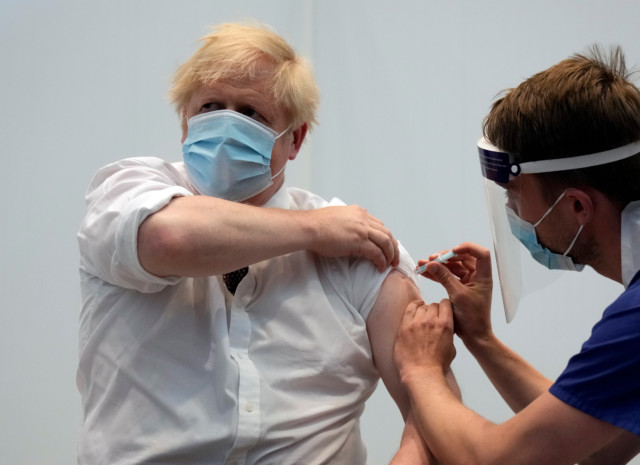 BORIS Johnson will take “added caution” when deciding whether to press ahead with the June 21 end of lockdown, a senior ally said today.

Boris Johnson, who got his second jab yesterday, hopes the vaccine rollout can save June 21

He said there are “some signals that we’re seeing” within the latest data about the impact of the new strain.

The PM is set to make a decision in 10 days’ time on whether to go ahead with lifting all restrictions or pause the end of lockdown.

Mr Jenrick insisted: “There’s nothing today that would lead us to believe we can’t move forward with the June 21 reopening.

“But you can hear from the tone and the decisions we’re making in other respects that we’re applying an added degree of caution in the days ahead.”

The cabinet minister said No 10 moved to haul Portugal off the travel green list to try and protect the June 21 plan.

He warned the emergence of a new “Nepal strain” of the Indian variant there could risk blowing the roadmap off course.

But the move infuriated Lisbon, which said that just 12 cases of the mutation have been discovered in the country so far.

Mr Jenrick also didn’t deny suggestions the Government could take a “third way” decision by watering down the June 21 easements. Scientists have suggested keeping mask wearing and working from home requirements could buy more time to get the whole population vaccinated.

Asked if that was on the cards, he replied: “There are options clearly available to the Government. Of course we keep these things under review.”

The top Sage scientist said it is likely to be around 60% more transmissible than the Kent strain, which it has now replaced as dominant in Britain.

And he added the data shows it is twice as likely to cause hospitalisation amongst the unvaccinated.

Prof Ferguson warned the data ” is pointing in a more negative direction than it was last week” when it comes to further unlocking.

He said: “It points towards the direction of being cautious.

“I think balancing, clearly, people’s desire – and there clearly is a built-up desire to get back to normal – against the potential risk is a very difficult judgment call.”

In a double blow a study published last night suggested the Pfizer jab works less well at preventing infection when it comes to the Indian variant. New cases have now risen above 5,000 a day for the first time since March, sparking further jitters about ending lockdown.

There are reports ministers have already drawn up contingency plans for a two-week delay to the June 21 date.

A Whitehall source told the FT: “No one wants this to go on longer than necessary.

“But there’s a sense that everyone could live with an extra two weeks if it keeps the new strain under control.”

No 10 still holds out hope that the lightning rollout of the vaccine, which is effective against the Indian variant, will keep the roadmap on track.

A whopping 75% of adults across the UK have now had their first coronavirus jab, and half have received both doses.

And the PM is facing pressure from Tory MPs to push ahead with the unlocking as planned.

Covid Recovery Group chairman Mark Harper insisted the Government “won’t get away with” watering down the easing of restrictions.

He said: “If social distancing stays, hospitality cannot operate in a sustainable way.”

And he said the consequences of such a decision would be “basically condemning a lot of people to not having a job or their business failing”.

Mr Harper said the PM must be decisive or risk “substantiating” Dominic Cummings’ claim he’s like “a shopping trolley smashing from one side of the aisle to the other”.

But he told Politico he wouldn’t “lose a lot of sleep if you still have to wear a mask on the tube or the train, or when you’re getting your groceries”.

Did you miss our previous article…
https://www.hellofaread.com/politics/brits-should-grow-fruit-veg-in-war-effort-style-bid-to-tackle-climate-change/

Emmerdale spoilers: New Woolpack pub owner to be revealed THIS WEEK; plus EastEnders &...

Coronation Street fans think Yasmeen will change her ‘not gulty’ plea as she begs...

I was on Celebrity Masterchef – the show left me with sleepless with nightmares,...