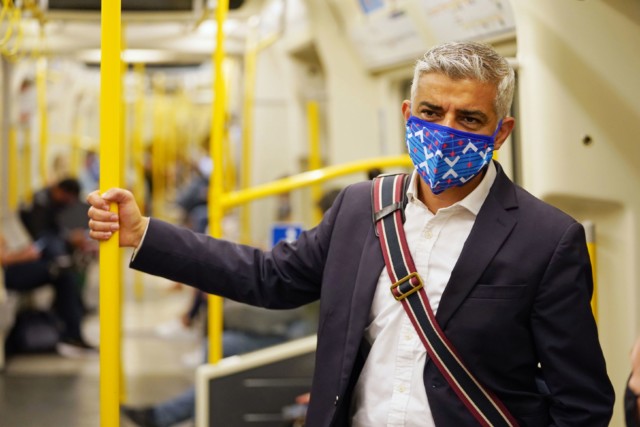 MASK-WEARING on public transport was embroiled in fresh confusion today as Grant Shapps BACKED Sadiq Khan breaking with his own Government guidance.

The Transport Secretary threw his support behind the Mayor of London’s insistence face coverings must still wear face coverings on buses and the Tube after July 19.

By requiring masks, City Hall has gone markedly further than Boris Johnson’s advice they should be kept only in crowded places.

It means even on a quiet carriage passengers will still have to don their coverings.

But Mr Khan muddied the waters by admitting he was powerless to enforce them on non-TfL trains and that it was an “imperfect solution”.

The PM has said passengers in England will be encouraged to use their own judgement from next Monday’s Freedom Day.

Cautious regional leaders have scolded the relaxation and threatened to defy Westminster in their areas.

Mr Khan today became the first to break ranks – and found an unlikely cheerleader in the Transport Secretary.

Mr Shapps said: “It is very much in line with what we expected – indeed wanted – to happen.”

The minister tried to play down the split, pointing to other conditions of carriage such as the TfL alcohol ban.

But the ringing endorsement put him at loggerheads with Cabinet colleagues and senior Tories vowing to bin their masks on July 19.

Commons Leader Jacob Rees-Mogg said he’d be tearing off his mask in Parliament because double-jabbed Brits have done their “societal bit”.

Mr Khan said he had been furiously lobbying ministers to keep mandatory masks across the board to avoid diverging rules.

While he can require TfL impose them, other trains coming into the capital will not be bound by the Mayor’s diktat.

Union barons have lashed out at the confusion and warned their staff could become “punchbags” over the “botched and confused advice.

RMT boss Mick Lynch raged: “As a result of this chaotic approach we now have a situation where the London measures are not enforceable by law, which means RMT members will be thrown into a hostile and confrontational situation from next Monday at heightened risk of abuse and assault.”

Did you miss our previous article…
https://www.hellofaread.com/politics/drivers-to-get-discount-for-charging-electric-cars-at-unpopular-hours-to-stop-national-grid-overloading/

Inside twisted world of Jean-Luc Brunel who ‘gave Epstein three 12-year-olds for birthday’ &...

Dancing On Ice’s Vanessa Bauer heads to the studio after her and Joe-Warren Plant’s...

Prince Andrew slammed for lack of empathy for Jeffrey Epsteins victims in interview about...

EastEnders Scott Maslen stops for a pint at the pub with a friend in...

Liz Truss charges into fresh legal row with EU over its ‘clear breach’ of...