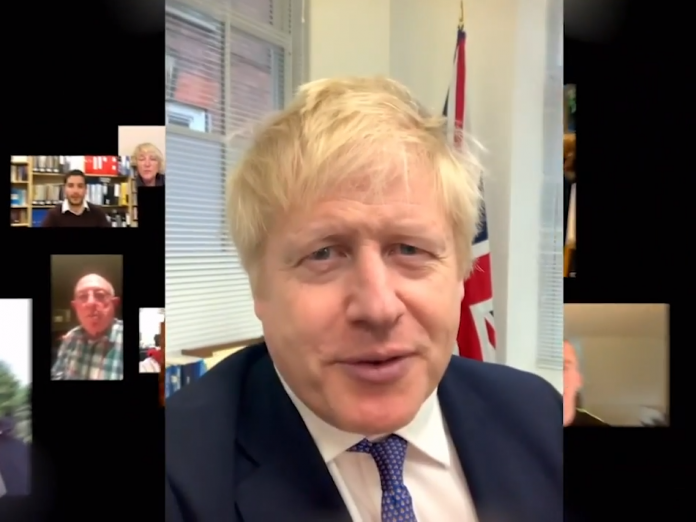 FED-UP voters urged Boris Johnson to get Brexit done and “put the great in Great Britain” in the latest Tory election video.

The Prime Minister was seen trying to rally his supporters in footage aired just a fortnight before Britain goes to the polls.

In a series of videos, different voters filmed their own reactions ahead of the coming General Election – the third in four years.

“Like most people, I am tired, I am frustrated,” said Ola from Croydon in the ITV broadcast.

While one quipped: “Talking and fighting about Brexit for so long, we’ve forgotten what puts the great in Great Britain.”

Johnson was then shown meeting with smiling voters, saying: “I’m campaigning to get Brexit done and take this country forward because I’ve think we’ve had three and half years of dither and delay and whether you agree with it or not, people want us to go forward.”

The broadcast aired as the Conservative Party made a formal complaint to regulators after Channel 4 said it would not accept only Mr Johnson as a guest in a prime-time debate on the environment.

The commercially funded public broadcaster refused to allow former environment minister Michael Gove to appear instead of Johnson alongside leaders from Britain’s other main parties – instead putting a block of melting ice in Johnson’s place.

Boris Johnson’s dad Stanley even tried to take his place – but was predictably blocked.

If the polls are to be believed, the Conservatives are forecast to make scores of gains at Labours expense in the Brexit-voting Midlands and North of England.

Labour is set to suffer its second-worst defeat since World War Two, winning only two more seats than Michael Foots party in 1983.

The YouGov MRP poll forThe Times– the only one to predict Theresa May would lose her majority – forecastsMr Johnsonwill win 359 seats in a triumphant return to No 10, up 42 on the 2017 result.