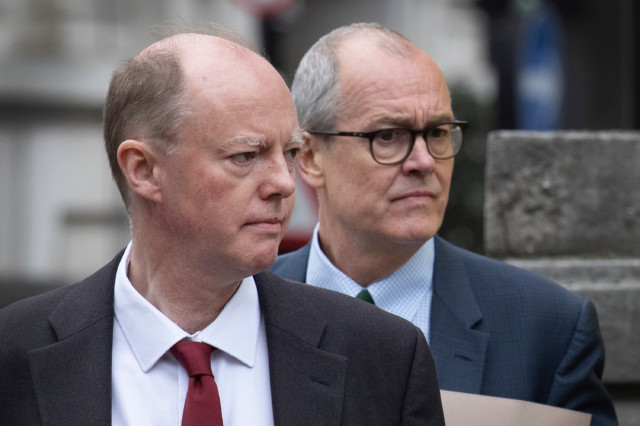 CORONAVIRUS could cause devastating damage to Britain in four key ways if the tide of cases isn’t stopped, the Government’s top scientists warned today.

Chief medical officer Professor Chris Whitty and chief scientific advisor Sir Patrick Vallance said all Brits could be hurt by the virus and it is “everyone’s responsibility” to help stop the surge in cases. Professor Chris Whitty said today: “There are four ways in which this virus is going to have a very significant potential effect on the population’s health if we let it go out of control.”

The first horrifying consequence of the virus would be if it is able to get entirely out of control and wreck havoc in care homes, hospitals, and vulnerable people through the UK.

He said this “is the easiest to identify” as people start dying directly from coronavirus and the daily deaths of people who contracted the virus start to shoot up.

Sir Patrick Vallance warned the UK could be seeing daily death counts jump to as many as 200 a day by mid-October if the number of new cases isn’t curbed.

And there could be as many as 50,000 new cases every day unless more is done to stop the spread of the virus.

Professor Whitty continued: “The second (damage to the UK) would be if the NHS emergency services were overwhelmed by a huge spike.

“That is what the extraordinary efforts of the population prevented happening in the first place.”

Boris Johnson brought in the lockdown in March as the NHS was at risk of being completely overwhelmed by patients of coronavirus.

The Nightingale hospitals were set up to expand the number of intensive care beds and mechanical ventilators available to be used to treat the sickest patients.

But if the NHS is overwhelmed it would lead to the third disastrous effect of coronavirus – indirect deaths of people who can’t get access to the healthcare system.

There has been looming warnings of a cancer crisis after many people who would have had the disease detected early were not able to get appointments – or treatment – as quickly as needed.

Professor Whitty said: “If the NHS is having to spend a large proportion of its effort in trying to treat Covid efforts because the numbers have gone up to very high levels.

“And (if hospitals are) trying to put in large systems to try and reduce transmission… it will lead to a reduction in treatment in other areas, in early diagnosis of disease and in prevention programme.”

One of the greatest impacts which Brits have already begun to see the consequences of is the massive economic damage wrought by overly-strict lockdown restrictions.

Professor Whitty warned: “Some of the things we’ve had to do are going to cause significant problems on the economy, big social impacts, impacts on mental health.

“if we go too far the other way, then we can cause damage to the economy which can feed through to unemployment to poverty to depravation all of which have long term health effects.”

Both top scientists warned the Government needed to tread an incredibly careful path between not wrecking economic havoc and not allowing the virus to grip the nation to the extent both direct and indirect deaths would sky rocket. Crippling self-isolation rules could stay BEYOND August 16 as minister warns ‘no guarantee’ they’ll...

What is Hollyoaks Later, when is it returning and which characters will be involved?

Schools reopening: What are my rights if I don’t want to send my child...