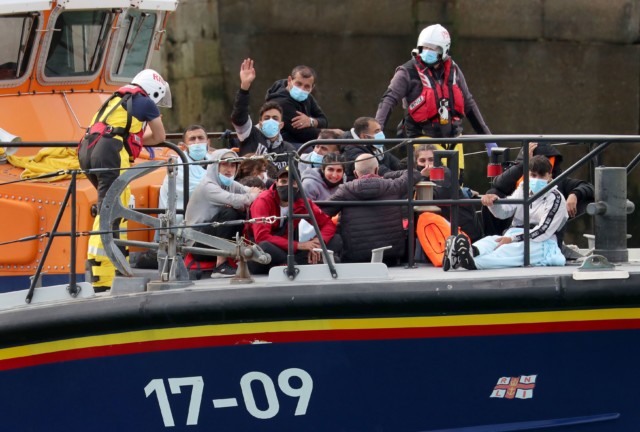 FURIOUS MPs today told the French to “get a grip” on the migrant crisis after the tragic death of a 16-year-old in the Channel.

Politicians hit back after French MPs suggested that the British hadn’t got an “ounce of humanity” and the death was partly the Government’s fault for failing to process asylum claims in France.

A group of people thought to be migrants are brought into Dover, Kent today A Sudanese youngster got into difficulty in the sea last night and was discovered at Sangatte, near Calais, this morning.

The unnamed youth is believed to have set off from the Descenderie de Sangatte beach with a friend in a ‘small makeshift inflatable craft’ soon after midnight on Wednesday morning – which later capsized.

The tragedy is thought to be the first known migrant death this year.

Politicians from France and Britain came out to express their horror at the death.

Home Secretary Priti Patel described it as a “tragic loss” and a “brutal reminder” of people smugglers “who exploit vulnerable people”.

But Calais’ MP Pierre-Henri Dumont, took to Twitter to blast: “What we all feared happened that night.

“How many more dramas will it take for the British to regain an ounce of humanity?”

He blamed “the inability to apply for asylum in Great Britain without being physically present is causing these tragedies.”

And claimed migrants didn’t want to stay in France and refused support from authorities there, “preferring to risk their lives on rafts” instead.

He said the “French government must start a standoff with the British” to solve the problem and that “migrants and Calais residents are suffering”.

British MPs tore into the Calais MP for his comments and urged the French to “get a grip” on the crisis to prevent more tragic deaths happening again.

Dover’s MP Natalie Elphicke stormed: “This latest death in the Channel is both shocking and sad.

“It’s time for the French to get a grip on their side of the border, smash the trafficking gangs, stop the boats leaving French shores and agree to boats being returned to France.

“Only that will end the Calais migrant magnet and prevent more lives being lost.” The home secretary took to social media to share her condolences

And former minister Tim Loughton accused the MP of “aiding and abetting people trying to commit a criminal offence” by urging people to be allowed to head to the UK.

He told HOAR: “The French think we should effectively allow everyone over here, and put on ferries to get them safely to get here. He’s said the reason they want to get to the UK is they think they can work illegally here more easily.”

And he demanded the step up and take responsibility for the problem too, raging: “The problem only exists because people are under the impression they have a good chance of getting across the channel.

“If the French intercepted boats in French waters, all of a sudden, that demand will vanish.

“That is the only thing that can solve it. It’s wholly irresponsible to suggest otherwise.

“Migrants are being incentivised to undertake the dangerous journey by the French failing to intercept them and taken back. The only thing is to cut off this horrendous crime.

“The French must stop shrugging their shoulders and do something about it.” Last August, two people died trying to reach Britain – one of them an Iranian woman who fell overboard and whose body was found in Dutch waters weeks later.

A 48-year-old Iraqi man was also found dead in Belgian waters after he tried to swim to the UK using plastic bottles as a makeshift life jacket.

It comes as dozens of migrants reached the UK from France by small boat today – nudging the year’s total closer to an astonishing 5,000.

August has seen a record 1,265 land already – smashing the 1,118 who arrived throughout July.

Ms Patel has vowed to end the illegal crossings through the Channel and crack down on criminal gangs who prey on families desperation to find a way to get to the UK.

She has demanded the French do more to make the route ‘unviable’, while Calais officials have blamed the UK for the crisis. Did you miss our previous article…
https://www.hellofaread.com/politics/thousands-of-gcse-kids-could-have-dreams-ruined-unless-huge-nightingale-drive-to-boost-places-gov-warned/

EastEnders spoilers: Peter Beale devastated to discover dad Ian has cut him out of...

Liz Truss and Rishi Sunak will battle to be Britain’s next PM after Penny...

Dancing On Ice’s Sonny Jay dedicating this weekend’s skate to late producer after his...

How to boost your CV to impress employers – and the keywords you need...