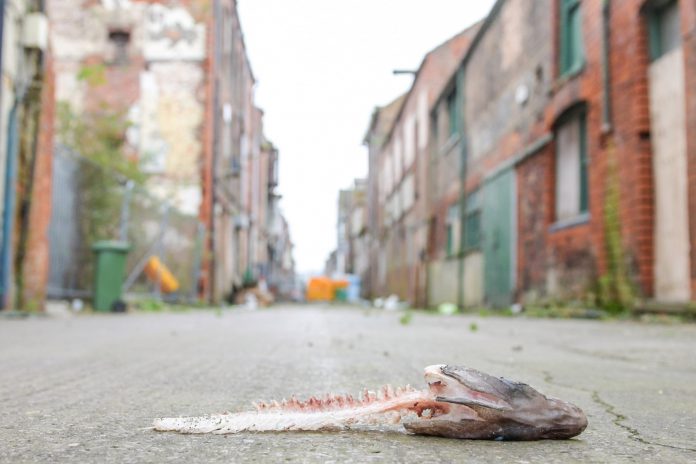 IT was once the busiest fishing port in the world – but today, Grimsby is one of the most deprived areas in the country, where boarded up houses line the roads and the port has become a ghost town.

Once considered a Labour fortress, Grimsby – one of 20 seats the Tories have in their sights to swing the election – is now on the verge of turning it’s back on the party, with residents convinced the town has been left to sink into destitution by successive governments.

Like so many other traditional Labour heartlands, Grimsby was once a working town which has lost its bedrock industry while spiralling social problems involving drugs and crime have drastically increased as a result of rising poverty levels.

People here are furious that their once-vibrant fishing town has been allowed to collapse, and many blame the European Union and its fishing policies for the decline.

So much so that in the 2016 Brexit referendum, North East Lincolnshire voted to leave by 69.9 per cent the tenth highest leave vote of anywhere in the country.

Now, despite the idea of a Conservative representative in working class Grimsby being laughable just a few years ago, things look set to change.

Labour are built on broken promises

Constituents feel like they’ve been left to rot here – and point the finger for decades of inaction at their Labour representatives.

In one pub, The Rutland Arms, we find Anne Blastland, 47, who’s lived in Grimsby all her life and works as a carer.

But Anne says her job has become harder over the years, being paid minimum wage while making 26 different visits a day.

“You should get paid more than minimum wage for being a carer you should get at least 10 or 15 an hour,” she says.

But despite Labour’s pledge to raise the minimum wage to 10-an-hour, Anne has turned her back on the party she once supported.

“I used to vote Labour. I just stopped because they promise you this, that and the other and then they get in and they dont deliver on it,” she says. Both of Anne’s children and her two grandchildren live in Grimsby which worries her.

“Id hate to think what kind of society theyll grow up in.

“Years ago, I used to go to the pub or go to a friends house and not think twice about walking home on my own you darent do that now. Youll probably get robbed or smacked.”

In the 12 months ending June 2019, North East Lincolnshire’s reported crime was up 10 per cent on the year before to 20,896, and the area saw a staggering 29 per cent increase in violence.

Most of the recent fatalities were due to heroin and cocaine overdoses, and local drug and alcohol charities blamed cuts to local services for the spike in deaths.

Casualties of the Cod War

On Rutland Street in the East Marsh area of Grimsby one of the most deprived wards in the country, we meet dad-of-two Darren Bridges, a 47-year-old who’s currently unemployed but used to work as a valve technician on oil rigs.

In 2015, the government ranked East Marsh as the worst area for education, skills and training in England, the second worst for crime, and the fourth worst for employment.

Fly-tipping is rife around here, where plastic kids toys and potties lay strewn in front of houses, as well as video tapes and long-dead Christmas trees piling up in front of one home.

And the smell of cannabis constantly hangs in the freezing seaside air blowing between vacant houses.

“We were sold down the river by Whitehall,” says Darren, who grew up in Grimsby. “We bought our own house and overnight the Cod War – when Iceland won all fishing rights in the North Atlantic – killed the fishing industry, and its had a knock on to every generation.”

“In my life nothings happened its just got worse,” Darren says.

“We just think all the fish is in Iceland. It isnt, theres the North Sea there and thats full of fish, and that can be fished, and we cant have it?

“Im unemployed and Im sick with depression and anxiety because Ive just got no self-esteem.”

Ann Brown, 71, a retired carer, is another lifelong Labour voter who is turning her back on the left-wing institution.

“I have voted Labour for the past 50 years but on December 12 for the first time in my life I’ll be voting Conservative,” Ann says.

“I can’t stand Jeremy Corbyn and him being Labour leader has really put me off the party entirely.

“I dread to think what kind of state the country would get into if he was Prime Minister, we would be an absolute shambles.

“Boris will be able to take control and do the things that desperately need doing in this country.”

And the anti-Labour sentiment has even caught on with young voters in Grimsby.

Bethany Linfield, a 23-year-old security guard, is ditching her allegiance to Labour over Brexit.

“Over the past four years their approach to Brexit has really frustrated me and I’m at the point now where there’s no chance of me voting for them again.”

Now Bethany says she’s going to support Boris Johnson because she believes he will get the job done.

“Hopefully that will be the end of Jeremy Corbyn ,” she adds.

Brexit party candidate Christopher Barker is also scooping up more voters in light of the town’s disappointment in Labour.

In the Freeman’s Arms pub on Freeman Street, he introduces me to Brian Wustruck a 59-year-old dad-of-two chip shop owner who’s lived in Grimsby for nearly 30 years.

Brian used to be a Labour supporter, but he’s now switched allegiances to the Brexit Party.

“It was a traditional family thing,” he says. “Labour was always for the working man back in the day.

“The only way forward is to adhere to the wishes of the 17.4million that voted to Leave,” he says.

“I know what I voted for I wanted to be out, I wanted my sovereignty back, I wanted the fishing industry back.”

And Grimsby was definitely great once upon a time the busiest fishing port in the world in the 1950s.

Down at the docks, a vast and crumbling city of empty buildings stands eerily by the water where tonnes of fish were brought into the port by fishermen.

Now all the thousands of workers are gone, replaced only by seagulls who crow in the derelict wrecks.

Christopher blames the Labour Party for presiding over the decline of the docks, as they’ve had an unbroken line of MPs in power in Grimsby since 1945.

Tucking into a haddock and chips on a seafront bench in Cleethorpes in one of his election videos, he says: “We want British fish from British waters landed on British shores, and trawled and processed using British jobs.”

People mocked him online for his use of the phrase “British fish”, with jokes made about underwater passports and swimming on the left.

But for those who would sneer at him for a supposed Little England agenda, Christopher’s hard-line position on Brexit reflects the views of the people of Grimsby better than Labour does.

Whether that will be enough to break the party’s 75-year grip on the town on December 12 remains to be seen.

Minecraft is getting FREE new maps and David Attenborough in a Frozen Planet 2...