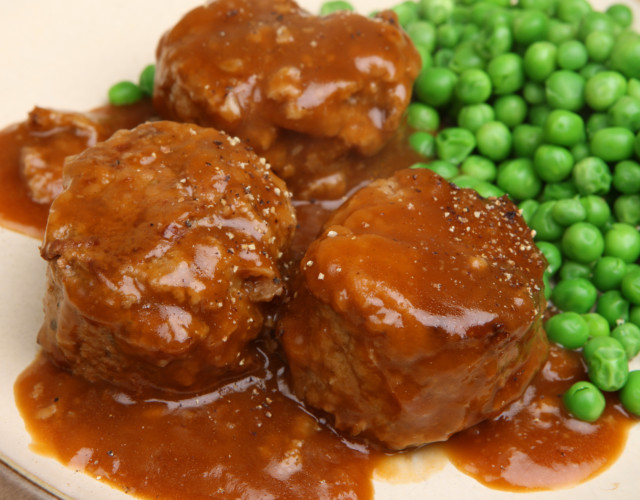 WOKE wars have broken out in the Black Country after Facebook tried to censor online appreciation of traditional local dish faggots and peas.

The Californian tech giants have tried to ban a West Midlands local history group for discussing their love of the ancient meatball treat – sparking fury from locals and MPs.

Members of a popular community group were left in disbelief after users were warned about posting “offensive” and “homophobic” content.

Faggots and peas is a traditional dish in the Black Country – but residents were told they were breaching community standards by discussing the local delicacy.

Admin Linda Beech has now had to warn users of to stop using the the word ‘faggot’, which is sometimes used as a derogatory term for a gay person in the USA.

In Britain, faggots are meatballs traditionally hand-made with offal by butchers and served with mashed potatoes and peas.

And the Dudley South Tory even invited Facebook’s billionaire boss Mark Zuckerberg to come and sample the local delicacy “next time you are in Brierley Hill”.

In a letter to the tech guru, Mr Wood wrote: “Online services like Facebook have an important – and challenging – role to play in combating abuse and extremism on their platforms, and I know the hurt that inappropriate language can cause.

“I don’t pretend that there are any easy solutions that will keep everybody happy.

“However, perhaps I could suggest as a rough rule of thumb that hate speech rarely involves recipes for offal meatballs and peas.”

He added: “The supposed violations appear to relate to a number of posts relating to the traditional Black Country delicacy of faggots and peas (or “faggits and paes” as they are sometimes known in these parts), large pork meatballs that have been eaten locally since at least the middle of the nineteenth century.

“One of the group’s admins has already been thrown out, and the group has been told that more admin violations may result in the group being disabled.

“It’s ludicrous that you’re banning a group celebrating a local recipe. What next? Censorship of spotted dick and a lifetime ban for Bake Off?

And he insisted: “There is nothing homophobic, discriminatory or hateful about faggots and peas.”

And web users have blasted the social media giant for “political correctness gone mad” after they were threatened with a permanent ban for talking about their famous dish.

Linda, who runs Pensnett, Brierley Hill and Blackcountry Now and Then page, which has nearly 14,000 members, told followers: “We are in danger of losing the group.”

She wrote: “Please be careful and think before you comment on the subject, as a few of you are still putting us at risk.”

She also revealed how one admin member had already been kicked off the website after Facebook trawled through posts dating back to May last year.

She said: “Facebook searched back to May last year and showed me the content, of which was perfectly acceptable to us Blackcountry Folks.

“One more strike and the group would have been evaporated.

“I know he is very upset and wounded with me, but I had no power of my own to prevent this happening to him.

“I feel as though I have lost my right arm, I cannot thank my other Admins enough for their total loyalty to the group.”

Linda has built the group up over five years and it has become a space to share old photographs and to reminisce about Black Country’s heritage. Community campaigner Adam Davies says he has written to Facebook to call for intervention to help save the group.

He said: “I have written a fairly lengthy report to Facebook as well as an email to their press team outlining the full context of the issue which their system is incorrectly flagging up.

“Obviously I won’t post the text of my email here because it contains the word which is in question, but it simply can’t be right that the existence of this brilliant group and the heritage of our area should be under threat because a Facebook algorithm/system doesn’t understand the name of a food dish which has long been associated with our area.

“I have a few thoughts about who else we can contact to make sure this reaches whoever it needs to.

“Please let me know if a real human from Facebook contacts you as I’ve asked them to in my email and report.

“We can’t let this brilliant group and our area’s proud heritage be lost because of this ridiculous situation!”

Garry Sawers, known as Black Country Gaz, said he has posted a song about ‘faggots an paeys’ on his page in protest.

He added: “It makes my blood boil cos it could be Black Country next.”

One local resident added: “This is political correctness gone made, the usual bunch of woke nonsense we have come to expect these days.”

Another poster said: “I’m a Londoner born and bred and even I know what they [faggots] are. I love the Brains ones. The word also means a type of fuel for the fire.”

Another horrified faggots and peas fan said: “Facebook has obviously decided it means something other than a rather tasty meat based product that’s synonymous with the Black Country.”

Faggots are made of meat off-cuts and offal such as pig hearts and originated in the Midlands and Wales, becoming popular during WW2 due to rationing.

Everything we know about the GTA 6 hacking scandal