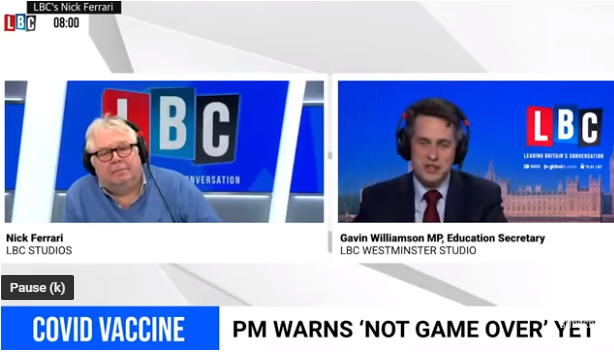 GAVIN Williamson today boasted that the UK is a “much better country” than France, the US or Belgium after it won the vaccine race.

Speaking to LBC this morning, the Education Secretary claimed the reason the UK was the first country in the world to approve a jab was because we have “much better” scientists than anywhere else.

He was asked earlier if Brexit was the reason for the world first, and replied: “Well I just reckon we’ve got the very best people in this country and we’ve obviously got the best medical regulators.

He paid tribute to the “brilliant, brilliant” people who had worked on it.

His comments came just 24 hours after Matt Hancock put down the huge vaccine boost down to us leaving the EU.

The Health Secretary said breaking free of the European Medicines Agency meant that the UK were able to make its own checks and decisions independently of the EU’s agencies.

Mr Hancock told Times Radio we have been able to “speed things up” faster outside of the EU.

Britain formally quit the EU in January, and the EMA has relocated from London to Amsterdam.

But it remains in a post-Brexit transition period until the end of this year, and EU pharmaceutical regulations still apply for now.

He explained: “And the reason we’ve been able to move this fast, and the UK is the first country in the world to have a clinically authorised vaccine, the reason is twofold.

“Firstly, because the MRHA has done a great job of working with the company to look at that data as it’s come through and do things in parallel, rather than one after the other as they normally would, that’s the first reason.

“The second reason is because, whilst until earlier this year we were in the European Medicines Agency (EMA), because of Brexit we’ve been able to make a decision to do this based on the UK regulator, a world-class regulator, and not go at the pace of the Europeans, who are moving a little bit more slowly.

“We do all the same safety checks and the same processes, but we have been able to speed up how they’re done because of Brexit.”

EU countries all agreed not to go down the path of emergency authorisation because that would lead to them competing against each other to get doses first.

The European Medicines Agency admitted two months ago it still hasn’t got back up to full capacity following a difficult relocation to Amsterdam in the wake of Brexit.

Yesterday Germany acknowledged that this diktat has meant a slower rollout of the virus fighter.

Their health minister Jens Spahn said: “What we opted for was a common European approach to move forward together.”

EU Covid efforts have also been hampered by hurried stripping of London of the HQ of the EU Medicines Agency in the wake of the 2016’s historic referendum.

There has been fury that the move seen by many to punish Britain for Brexit has actually hampered the EU’s Covid response.

Did you miss our previous article…
https://www.hellofaread.com/politics/welsh-face-fines-for-travelling-to-tier-3-areas-under-new-laws/

MPs & leaders go into battle to stop their areas from being shoved into...