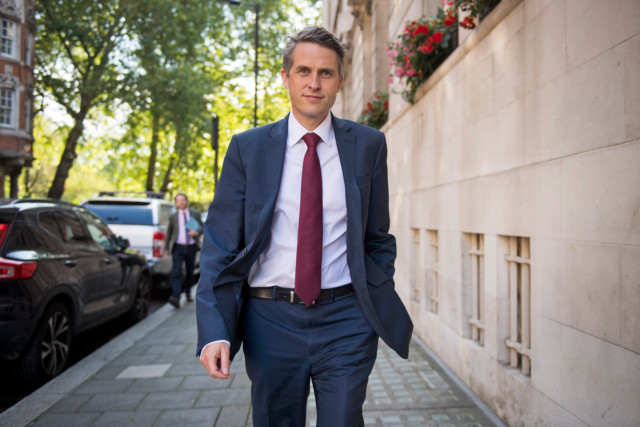 GAVIN Williamson is said to have offered to resign as Education Secretary but Boris Johnson refused, it’s been reported today.

The under-fire Cabinet minister is facing mounting pressure from Tories over the chaotic exams u-turn earlier this week.

Gavin Williamson is reported to have offered to resign Mr Williamson spoke with Boris on the phone on Monday – with the PM taking a break from his holiday in Scotland to deal with the fallout.

The i newspaper reported that he offered to resign, but that the PM did not accept this.

No10 sources refused to comment on the reports today.

However, one MP told HOAR he wasn’t serious about quitting.

They said: “He is not a resigner. You would have to chop off his hand to get him to resign.”

Another said “vultures are circling” but Mr Williamson is a “master of finding someone else to chuck under a bus”.

Yesterday he said he intended to continue as Education Secretary.

He was asked on several morning shows if he would quit, but he insisted he was “determined” to get on with the job “over the coming year”.

The Government was forced into a humiliating climbdown over GCSE and A-level grades this week.

A whopping 40 per cent of students getting their results last week had them marked down by a controversial algorithm.

After days of pressure from devastated students, furious parents and irritated politicians, the Government bowed down and changed their tune.

Instead kids will get their teacher-predicted grades, or whichever is higher.

On Saturday Mr Williamson had insisted there would be “no U-turn, no change” but just 48 hours later a huge operation was underway to change tack.

Mr Williamson now faces a fight to hold onto his job in the face of spiralling opposition.

He was also blasted after he tried to shift the blame onto the exams regulator, Ofqual.

However, Government sources have stressed the PM has confidence in him, and there are no plans to sack him.

Rumours that a reshuffle could be on the cards in the autumn have also been played down.

This morning Matt Hancock suggested that it would be wrong to get rid of Mr Williamson just two weeks before all kids are supposed to be back in school.

He said the Education Secretary had been doing the best he could in “difficult circumstances”. Matt Hancock said the focus should now be on reopening schools Health Secretary Matt Hancock said ministers were working to resolve pressure over university places amid calls for the cap on medical school students to be lifted.

When asked why Mr Williamson was still in the job after the A-levels fiasco, he said the focus was on getting all children back into full-time education.

He told Sky News: “These are unprecedented circumstances and I think everybody is working their hardest and trying to do their best in very difficult circumstances and I know that is true of Gavin Williamson as it is of all members of the Government.

“The big focus is on getting schools back and open at the start of next month, an incredibly important task.

“I don’t think we should be distracted from that task now. We need to absolutely focus on it.”

Meanwhile, kids are scrambling now to get university places after the Government ordered places to honour their offers.

After thousands of pupils had their grades marked up, the Government now wants as many of them to go this year as possible.

However, there simply isn’t the space for everyone who has an offer and who meets their grades to go – and some will have to defer their places until 2021. Kids are due to receive their GCSE grades on Thursday, and the Department for Education has said there will be no delays.

It’s expected that the uplifted grades will spark a scramble for sixth form and college places too.

Pubs named after Duke of Edinburgh saddened they are not able to give Prince...

Meghan Markle latest news – Camilla BLASTED Duchess as ‘ungrateful’ and branded her a...

Lockdown rules update: What you can & can’t do now – and Boris Johnson’s...