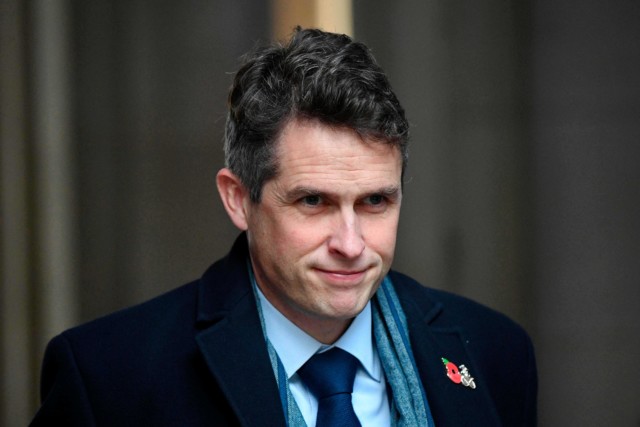 GAVIN Williamson is set to announce at 4pm TODAY when schools will reopen for millions of kids.

Ministers are desperately trying to wrestle control of the new mutant strain of Covid ripping through the country – and make sure children can go back to school. Gavin Williamson is pushing for a staggered return for school kids

Mr Williamson, the Education Secretary, will set out the plans in a statement to the House of Commons this afternoon.

Primary school kids are expected to be able to return to class on January 4, along with vulnerable children and those of key workers.

But older children, who are more likely to catch and spread Covid than younger kids, could spend weeks studying remotely.

Those preparing for their GCSEs and A-levels are expected to return on January 11 – but other secondary school students might not be back in classrooms until January 18.

But he has spent the last few days locked in meetings with Boris Johnson about how to get children back behind desks safely.

Mr Johnson’s Cabinet is split between those pushing for kids to go back as soon as possible – and those taking a more cautious approach, backed by Government scientists, to delay the reopening of schools.

When asked about when pupils would learn their fate, the Health Secretary stressed this morning the details are still “under review”.

Mr Hancock told BBC Radio 4: “The Education Secretary will be setting out his proposals later today.

“Clearly, we want to protect education as much as possible, that’s been part of our strategy.

“The new variant does make it much easier for this disease to transmit.”

The mutant Covid which caused London and most of South East England to be thrown into Tier 4 lockdown, could be as much as 56 per cent more contagious.

It comes as Mr Hancock is preparing to announce millions more Brits will be plunged into the toughest lockdown restrictions later today.

Mr Williamson is pushing for kids to go back in a staggered approach.

The Health Secretary stressed that the Government focussed on keeping kids in school in autumn – but the new strain made it more difficult.

“What matters for the next few months, for the winter weeks for this country, we keep this virus under control, keep people alive.

“We know the vaccine is coming. we have to get through to the other side.” Yesterday, UCL Professor Andrew Hayward, who sits on the Government group of scientists, Nervtag, said there would need to be tougher restrictions in order to safely get kids back behind desks.

But Dr Mike Tildesley, of the Sage advisory group, said: “We must avoid falling into the situation where schools are closed for next term.

Professor Neil Ferguson, the architect of the first Covid lockdown, said that even shutting them and universities may not be enough to regain control over the new virus strain.

“Just because there is a rise in cases in that age group doesn’t mean they’re being infected in schools.”

However, Prof Ferguson said: “Nobody wants to keep schools shut. But if that’s the only alternative to having exponentially growing numbers of hospitalisations, that may be required, at least for a period.

“My real concern is, even if universities and schools do have staggered returns or even stay closed, how easy it would be to maintain control of the virus is unclear now.”

MPs have warned there could be disastrous consquences if kids spent more time out of school.

Chair of the Education Select Committee Robert Halfon lashed out at suggestions schools could be kept closed, saying it would cause an “epidemic of educational poverty”. Meghan Markle and Prince Harry had a strict no kissing rule for their wedding...

Nicola Sturgeon tells Scots NOT to book holidays and threatens to ‘go further’ on...