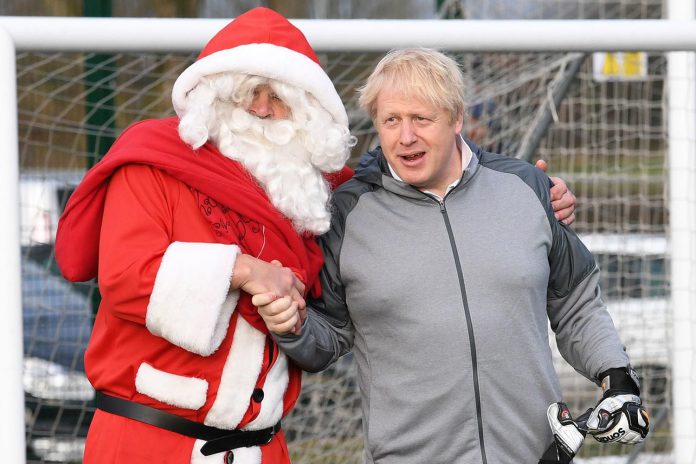 BORIS Johnson yesterday spelled out the momentous choice facing voters as they head to the polls for the most crucial Election in 40 years.

The PM said a vote for the Tories would break the Brexit gridlock, attract 150billion in foreign investment and boost our public services.

But he warned the very real prospect of Jeremy Corbyn entering No10 would plunge Britain into bleak midwinter chaos.

Mr Johnson told HOAR on Sunday: Its much closer than many people think.

We only need to win nine seats to end the uncertainty, get our deal done and watch a tidal wave of inward investment.

“What would you rather have under the Christmas tree 150billion of investment or two referendums from Jeremy Corbyn?

BoJo hammered home the stark reality of what is at stake on Thursday as he embarked on a hectic last lap of Britain.

He vowed to hit the ground running if he is returned with a majority and crack on with tackling peoples priorities. Hiring extra cops and nurses, urgent action on violent crime and tightening Britains borders are top of his to-do list.

Mr Johnson made a direct appeal to the nation: You can trust me. Im the only one who can deliver Brexit and take this country forward.

Victory for his Tory Party would instil a new spirit of self-confidence in the nation, he said and could even spark a baby boom.

But he stressed Brits could wake up on Friday the 13th and find clueless crackpot Mr Corbyn preparing to be PM, propped up by Scots Nationalist leader Nicola Sturgeon.

He added: We can do all this but only if we get a working majority we need to deliver Brexit, end the uncertainty and focus on the issues that matter.

Our vision for the country is a very exciting one. I want us to recover our self-belief and take giant steps forward.

You will hear the pinging of the guy ropes, one by one, as Gulliver stands up again, the sun rises and we are able to take the first huge stride to the future.

And, as the investment bank Goldman Sachs have said, there will be a tidal wave of investment in Britain.

Mr Johnson recalled the baby boom after the 2012 London Olympics and said leaving the EU could spark another.

He declared: It will be nothing compared to the way Cupids darts will fly once we get Brexit done.

And he enigmatically added: Im not going to make any demographic projections but I would not be surprised at all.

But he added grimly: If we dont win, it would be a nightmare on Downing Street with the most left-wing government the Labour party has ever put forward.

It would mean another broken, hung Parliament with every day next year a Groundhog Day in Parliament.

In an exclusive interview, Mr Johnson hailed Thursday as a historic election that would shape the nations future for decades.

He compared it in importance to polls in 1906, 1945 and 1979 with the exception that this time it is not a single party that has lost its way but the entire Parliament.

Mr Johnson said: Three years ago, this country voted to leave the EU with the biggest democratic verdict ever passed down in British politics. Yet ever since that vote, those MPs who campaigned to remain in the EU have paid lip service to leaving while doing everything in their power to delay, obstruct and block Britains exit.

We are totally paralysed. We need to get moving again.

In a break from his hectic electioneering tour, Mr Johnson denied he was running scared by refusing to be interviewed by the BBCs interrogator-in-chief Andrew Neil.

He said: This is the 121st interview Ive done. I cant fit everybody in.

“Lord Buckethead, who is standing against me in Uxbridge, Piers Morgan and many others want an interview and I havent been able to fit everybody in.

Mr Johnson compared his own programme for power with Labours. Tories would deliver a 34billion boost in NHS spending, with 40 new hospitals over ten years, 50,000 extra nurses, 6,000 more GPs, 50million more GP appointments, plus 20,000 new police officers. By contrast, Mr Corbyn would take us back to square one, he said, with massive spending, more borrowing and increased taxes.

He said: The risk of a Corbyn government is youd have crackpot plans like a four-day week and crankish left-wing ideas that would make running all our public services impossible. Theyd take a sledgehammer to the economy.

Corbyn and John McDonnell say they want to bring back exchange controls like Cuba or Venezuela. Even Angola has got rid of those.

The PM grimaced when asked to answer Labours main accusation that he is a man who cant be trusted.

Its just a load of rubbish, he scowled. Just take a look at what I achieved when I was Mayor of London. When I said I would do something, I went and we got it done.

We cut crime by almost 20 per cent, we cut the murder rate by 50 per cent, we had massive investment in knife crime which is what I campaigned on in 2007.

“Whats more, we beat it. We reduced serious use of violence by a third and we greatly reduced the number of kids who were dying from knife crime.

When I say we are going to do something we do it.

“Yes, its true theres one thing I wanted to do which they stopped me from doing thats coming out of the EU on October 31.

But Corbyn deliberately passed a law with the connivance of the other parties which was an outrage to force the Prime Minister to break his promise.

It is perfectly obvious from what Corbyn is now saying and doing that he doesnt want to deliver Brexit. He has no vision or plan for it.

Mr Johnson has put Christmas planning on hold until after the election and wont have a tipple until his Brexit deal is passed.

He said: All I want for Christmas is Brexit. Lets wake up on Friday and go forward with a majority not go back into a Groundhog Day nightmare with Jeremy Corbyn and Nicola Sturgeon.

I want a happy Brexmas.

Meghan and Harry latest news – Queen’s TINY mistake on day out with Meghan...

Call of Duty bans half a MILLION players from Warzone in major crackdown on...