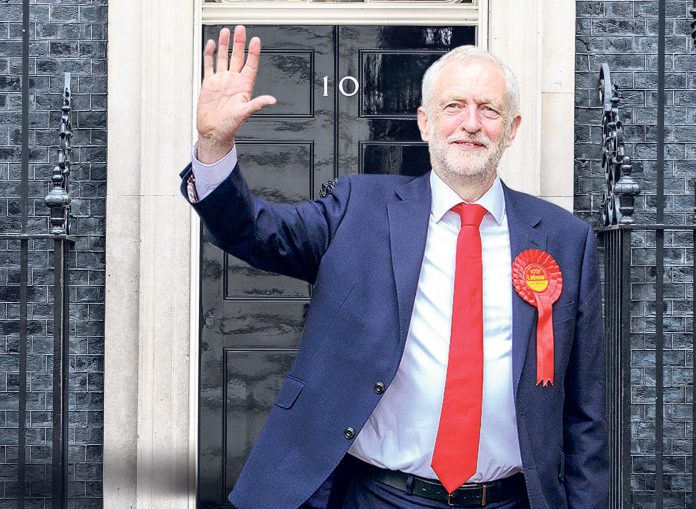 IMAGINE switching on your TV on Friday the 13th and seeing PM Jeremy Corbyn amble from the door of No10 to address the nation.

Ticker-taping along your screens would be news of the Pound and markets crashing, putting millions of jobs and pensions at threat.

Congratulations have poured in from Corbyns friends in terror groups Hamas and Hezbollah as well as IRA killers, ayatollahs of Iran and comrades in Venezuela.

In Brussels, Michel Barnier smiles wryly as he draws up negotiating papers for the only British voter neutral on Brexit.

Yet this Nightmare on Downing Street isnt an impossibility.

In 2017 just a few thousand extra votes across a dozen seats would have been enough.

So what would Corbyns first 100 days look like? First they would nationalise the Royal Mail, railways, energy supply networks, water and sewerage companies.

The CBI reckon that will initially cost 196billion about nine per cent of annual output.

Chuck in free broadband for 20billion, which Labour claim they can fund by taxing Big Tech.

All this on the premise that the State can run industry more efficiently than private companies.

A giant real-time experiment called the 1970s suggests it doesnt.

The Institute for Fiscal Studies (IFS) says the move could even disrupt energy sector decarbonisation.

Then tip in Labours pledged day-to-day spending of 83billion a year, 55billion a year for capital spending and 400billion for a National Transformation Fund.

The colossal sums would be paid for by hiking corporation tax, City financial transaction tax and those earning more than 80,000.

But the IFS believes his cash tsunami would involve bigger tax burdens on average earners. And business, they say, would be left with just about the most punitive corporate tax system in the world.

Pension funds huge investors in the utilities up for nationalisation would be at risk if shareholders are not properly compensated.

Firms and the rich would flee abroad, taking their taxable billions with them.

McDonnells plan to seize ten per cent of the shares in every big company would mean more misery. Law firm Clifford Chance says at least 31billion of the cost will be borne by pension funds.

Then Corbyn would roll back trade union legislation. Walkouts over ridiculous pay demands and petty grievances would be commonplace. Public sector pay hikes could lead to soaring inflation.

A Jeremy Corbyn premiership would be peacetime Britains darkest day

Boomers will remember the 1978-9 Winter of Discontent when 29million days were lost to strikes.

In the 1970s tens of thousands quit Britain to escape industrial unrest and high taxes. Expect another brain drain under Corbyn.

A major reason why Britain joined the EEC in 1973 was a desperate attempt to improve its uncompetitive productivity.

Under PM Corbyn talks to leave the EU would be in the hands of a Brexit neutral. Think about that logically.

Corbyn will ask Europe for a deal which he will then not back in a second referendum. So the EU will offer something as close to Remain as they can possibly get. EUref2 would be a choice between Remain and Remain-in-all-but-name.

And Corbyn believes that would placate 17million Leavers?

Corbyn needs Lib Dem and SNP help to take No10. Thats why hes been playing footsie with Nicola Sturgeon over a Scottish vote. Britain cannot be governed by continuous referendums. They will only whip up more division and rancour.

Colonel Tim Collins, remembered for his eve-of-battle speech in Iraq in 2003, warns a Corbyn administration would not be trusted to receive vital intelligence from allies.

This would have significant and far-reaching consequences for Britains security.

Nearly half of British Jews would seriously consider exiting should Corbyn win.

Chief Rabbi Ephraim Mirvis warned: A new poison, sanctioned from the very top, has taken root in the party.

Labour is only the second party after the far-right BNP to be investigated by human rights watchdog the Equality and Human Rights Commission.

Since the last election around another three million have registered to vote. Over two-thirds are under 35 an age group that usually backs Labour and who have no memory of the Winter of Discontent.

While opinion polls favour the Conservatives, our destiny will again be decided by tiny swings in key constituencies.

So beware Friday the 13th. A Corbyn premiership would be peacetime Britains darkest day.

Love Island fans launch fundraiser to fly a date to Nas as he mopes...