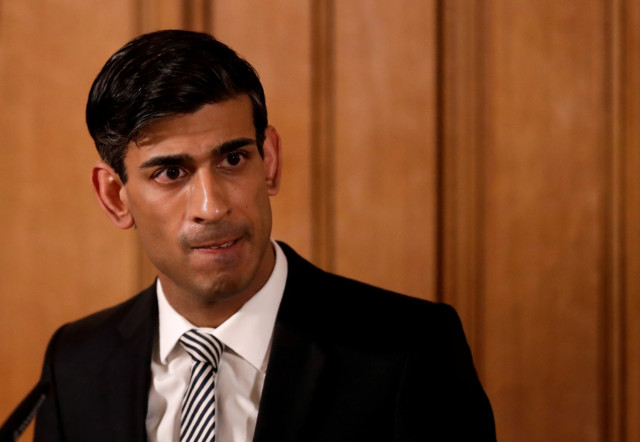 According to figures from the Office of National Statistics, public sector net borrowing last month was a massive £51.1 billion higher than the same month last year.

The cost of the Chancellor’s furlough scheme – which pays furloughed staff 80 per cent of their wages up to £2,500 a month – is £14billion a month, according to the Office for Budget Responsibility.

The OBR has estimated the Government will have to borrow £123 billion this year to cover the costs of its schemes and the furlough scheme will cost £56 billion.

More than half of all working age Brits are being given Government support during the pandemic.

Government borrowing has been exacerbated by sharp decreases in tax revenue from people and businesses.

Company profits have collapsed and many businesses have been able to defer taxes through Government schemes.

ONS officials warned the public sector net spending figure is less reliable than usual as a measure of national debt. Central Government cash requirement – which relies less on tax revenue – has also rocketed to £62.5 billion – up £73.3 billion on last year, which has a small surplus.

Economists have labelled the figures “awful” and urged the Government to begin scaling back the schemes such as the furlough programme immediately.

Mr Sunak announced he would be extended the program until October – but with slightly less support.

“UK government borrowing in April (£62.1billion) was almost as large as the deficit in all of last year (£62.7billion).”

“A temporary increase in borrowing is a price worth paying to save lives and protect businesses and jobs from a one-off shock like coronavirus.

“But the government needs to wean the UK off this extraordinary level of state subsidy as soon as possible.”

“This huge amount of intervention will distort the economy, undermine market incentives, and ultimately hold back the recovery.” Did you miss our previous article…
https://www.hellofaread.com/politics/mayor-sadiq-khan-could-force-londoners-to-wear-masks-on-the-tube/

I was ‘left screaming’ after being ‘assaulted’ by police officers over shoplifting arrest, says...

Prince Harry and William’s touching tribute to Diana in full