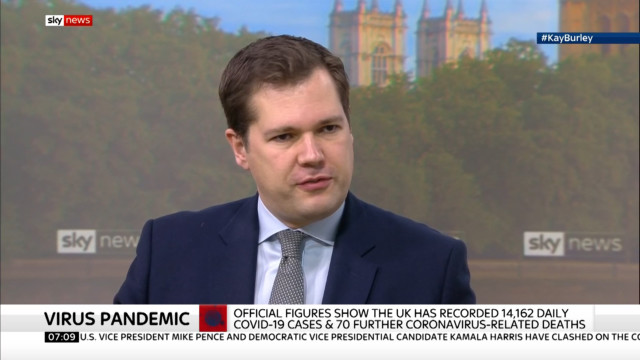 LOCAL lockdown measures have not had “the impact we would have liked to have seen”, a minister finally admitted today.

As the Government prepares to order pubs in parts of the North of England to shut as early as Monday, the Housing Secretary admitted today that some of the measures hadn’t brought the numbers down like it was hoped.

Robert Jenrick insisted that “the measures do work” and that if they hadn’t have been put in place, the rate of infection would have been even higher than it is now.

He was unable to confirm what measures would be put in place next week, if any.

Asked if there will be an announcement linked to the hospitality trade next week, Mr Jenrick told the BBC: “We are considering the evidence. In some parts of the country, the number of cases are rising very fast and we are taking that very seriously.

“If we do have to take further steps, then obviously we will take very seriously how we can help and support those individual businesses.”

Cases in Manchester, Newcastle, Liverpool and other areas have seen their Covid cases soar in recent weeks to between 480 and 560 cases per 100,000.

But many of these areas have had local lockdown restrictions put in place for weeks or even months, as the rates continued to climb.

Asked if the hospitality sector is increasingly part of the problem with infection rates, Housing Secretary Robert Jenrick told BBC Radio 4’s Today programme: “There is evidence that it plays a role.

“It is commonsensical that, with a virus that’s transmitted through human contact, the longer one spends with individuals in indoor settings, in a pub or a restaurant, the more likely it is that we spread the virus.

“The more drinks that people have, the more likely that some people are to break the rules.”

David Mellen, the Labour council leader in Nottingham, said there was now a risk that “this weekend that people will think ‘This might be the last chance before Christmas, so let’s go out and party.’ And we can’t have that.” Local leaders have stressed they aren’t working properly and urged the Government to think again.

Sir Keir stormed: “Today is 100 days since the first local restrictions were brought in.

“20 local areas have been under restrictions for two months, in 19 of those infection rates have gone up.

Some of the areas have seen a shocking 3653 per cent rise in infection rates since tough restrictions were brought in.

At least 20 million across the UK are under restrictions.

Resentment has been brewing over a clear North-South divide between parts of the country with soaring rates, and others with lower numbers.

And Boris intends to unveil his simplified three-tier local lockdown code next week.

In plans signed off at a ministerial “gold command” meeting last night, Tier 1 will see current social distancing measures, the “rule of six” and a pub curfew of 10pm enforced.

Areas in Tier 2 will have the same restrictions plus a ban on households mixing.

Vast swathes of the virus-hit North West and North East would automatically fall under Tier 3, in which pubs, restaurants and other hospitality businesses will be shut.

People will not be able to mix households — except those with exemptions — and will have to abide by the national social distancing laws, such as wearing face masks.

Ministers are still working out other details, such as whether leisure centres and hairdressers stay open or shut.

The measures will be imposed for a limited period — certainly for some weeks — but are yet to be fully agreed. The PM is preparing to implement even tougher measures in the North of England to stop the spread.

He’s set to close pubs, restaurants and possibly more venues in some areas from Monday, in a move which will be another harsh blow for the hospitality sector.

But he faces a rebellion from MPs, local leaders in the North West and North East and even close allies over the new measures.

Andy Burnham, the Labour Manchester Mayor was furious about the new measures.

He raged today: “No discussion. No consultation.

“It is proving impossible to deal with this Government.”

Yesterday Nicola Sturgeon announced 16 days of drastic rules banning booze in pubs and restaurants, as well as forcing them to close every day at 6pm from Friday evening.

Top Tories have begged him not to copy Scotland.

One of Mr Johnson’s closest allies, former Northern Powerhouse Minister Jake Berry, told HOAR: “It would be economic suicide for England to follow this path.”

Previously pubs were ordered to shut only in Bolton over their soaring figures – but have since been told they can reopen.

Chancellor Rishi Sunak is said to be scrambling to put together a local bailout package for businesses facing ruin – with any announcement to wait until that is ironed out.

Some shops could also be forced to shut, but workplaces and schools would remain open in a partial lockdown.

Greater Manchester mayor Andy Burnham said the North would resist any lockdown unless Government worked out a plan with local leaders.

He said: “We will not have a tier system imposed upon us without us having the ability to see and agree the detail.” From Dublin to Rome — cheap hotels and bargain booze as prices for city...

350,000 young job-less Brits to get wages subsidised by Government in mini-Budget