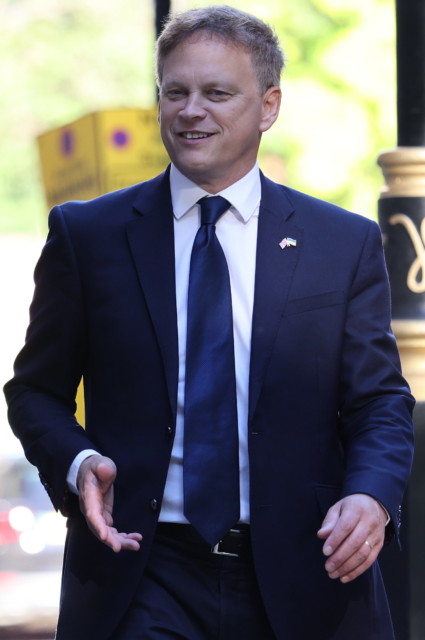 The Transport Secretary, who announced a tilt at the top job yesterday, went to see Mr Johnson the day before he resigned.

Grant Shapps, who has officially launched his leadership bid, says Boris Johnson quit hours after they had a ‘candid’ discussion

After a “candid” conversation, Boris decided to throw in the towel, Mr Shapps said this morning.

Speaking to Sophy Ridge on Sky, he said: “I always think best thing to do is be candid and say it as it is.

“I could see things were coming to a close.”

He said that as a leader, the PM was surrounded by people who “tell you what you want to hear”.

“I wanted to make sure he was getting facts,” he said.

“That was my conversation.

“He listened carefully, and the next morning said he would stand down.”

Ms Ridge asked if Mr Shapps was part of the reason for Mr Johnson’s resignation.

He replied: “Yes – it was presenting the reality, so yes.”

And in a jab at the outgoing Prime Minister, Mr Shapps said the Government’s problems became “insurmountable” because of Partygate.

“We were in lockdown,” he said.

“In the end, those that make the laws have to live by the laws, and that made it impossible.”

Mr Shapps enters the race with a pledge to cut taxes, spread prosperity to the regions, seize the benefits of Brexit, and speed up access to health treatment.

He would also increase spending on the Army.

In an interview with HOAR on Sunday, he said: “My message to MPs is simple. I can help you win. I will win your seat.”

He spoke after bookies’ favourite Ben Wallace pulled out of the race yesterday.

With the politician gone, key figures are lining up their campaigns to get the keys to Number 10.

Hot favourite is former chancellor Rishi Sunak, who was the first big beast to go public with his bid to become leader.

It’s believed 19 Tories — including a host of no-marks — are weighing up tilts at the top job.

Of that number, more than 15 are expected to take a punt.

However, the race for No10 is expected to be scaled back to just four candidates by next week.

Johnson fired the starting gun on the race on Thursday when he reluctantly quit.

In a defiant speech, he described his colleagues’ decision to oust him as “eccentric” and the result of “herd instinct”.

He is currently running the country with a ‘zombie cabinet’.

Queen Elizabeth latest news: Disgraced Prince Andrew has ‘NO way of edging back’ into...

Sarah Everard’s family to ‘get the answers they need’ as Priti Patel launches probe...

Davina McCall, 52, launching sexy underwear range as she moves on from ‘hard’ divorce...