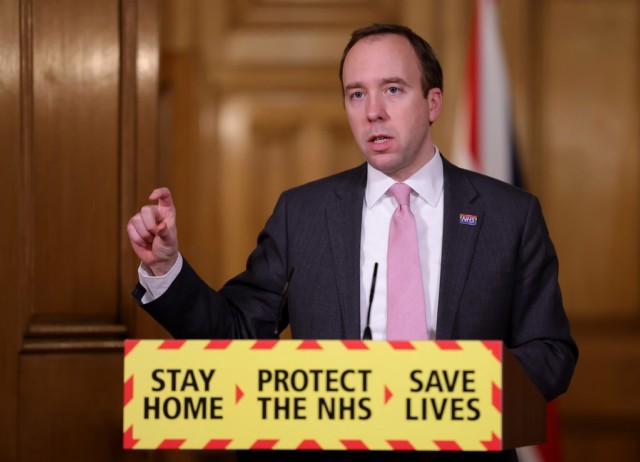 MATT Hancock vowed today that Britain needed to “come down hard” on the new South African variant as he ordered Brits in infected areas to stay inside and get tested.

It came as he revealed 9.2million people have now had their first vaccine – with nearly one million people over the last weekend alone.

931,204 vaccinations took place just this weekend, he told the nation at the daily press conference, and over half of people in their 70s have got the jab too.

Nine in ten over 80s have had their first dose, and every care home looking after older adults has had an offer of a jab for all residents and staff, he said.

Today the UK has also ordered another 40million vaccine doses from Valdeva, he revealed, in a boost for the country’s supply.

His appearance comes after Britain’s record-breaking vaccination day yesterday, when more than 600,000 people across the country received a dose.

That means around 1 per cent of the entire adult population were given a jab in the space of just 24 hours.

Meanwhile a leaked Cabinet Office dossier showed the number of infections across the country is now “stabilising”.

Ministers have been briefed that hospital admissions are going down but deaths will remain high for several more weeks, according to Politico.

Earlier today it was revealed that 80,000 Brits will be asked to ake a door-to-door Covid test after more than 100 cases of the South African variant were discovered across the country.

Some of them hadn’t travelled recently either – meaning there is community transmission of the virus.

The mutation that emerged from South Africa, named 501YV2, is feared to be 50 per cent more contagious than the original strain but there is no evidence that it causes more severe disease.

Health minister Helen Whately said the news the rollout of vaccines to care homes is almost complete is “really tremendous news” for the whole country.

She told Sky News: “We all know they’ve had such a hard time during this pandemic. It’s such a big moment.

“We said they would be top priority for the vaccination and we’ve gone in and we’re delivering on that.

“It does feel like a real milestone for our care homes. It’s been such a dark time and now this is a moment to give them hope and some protection against this tremendously cruel virus.”

But she also warned it will be several weeks at best before any restrictions in care homes can be relaxed, as the vaccine takes time to come into effect.

She said: “At the moment it is too soon. We have had care home residents only just vaccinated.” On Saturday it also emerged early data shows vaccinations are already beginning to ease the pandemic and reduce cases.

Anthony Harden, deputy chairman of the Joint Committee on Vaccination and Immunisation (JCVI) said there is evidence Brits are being protected by the jabs.

He added studies show the effect of vaccines is still building a month after one dose, supporting the UK’s decision to increase the wait between the first and second jabs to innoculate as many people as possible

Yesterday Mr Hancock said he hopes for a “great British summer” as the jabs rollout continues ahead of schedule.

But Ms Whately also said it was “too soon” to discuss Britain giving away some of its vast vaccine stockpile to other places, such as the EU, that have struggled with supplies.

It came as Boris Johnson said earlier he may ditch regional tiers in favour of lifting rules across the country at the same time.

But he stressed he hadn’t made any firm decisions yet, and was keeping an “open mind” on it.

It came after reports emerged last week he may ditch the local approach and put blanket rules in place across the country.

It may mean that people in areas where the cases are lower and lockdown is working better, might then have to wait longer for the whole of England to come out of restrictions.

The PM told reporters: “It may be that a national approach, going down the tiers in a national way, might be better this time round, given that the disease is behaving much more nationally.

“If you look at the way the new variant has taken off across the country, it’s a pretty national phenomenon.

“The charts I see, we’re all sort of moving pretty much in the same sort of way, I mean there are a few discrepancies, a few differences, so it may be that we will go for a national approach but there may be an advantage still in some regional differentiation as well.

“I’m keeping an open mind on that.” The Tiers system has been in place since last September – but ministers have been pursuing a regional approach since the summer.

Tier 1, with just rule of six and the 10pm curfew, and Tier 2, with no mixing inside, allowed for some freedoms and businesses to remain open.

Across the country there have been huge regional differences depending on the time they have been in or out of lockdown or Tiers for.

London and the South East recently saw cases drop faster after going into Tier 4 earlier than the rest of the country.

Boris Johnson vows he is ‘very optimistic & hopeful’ for June 21 reopening when...

Doom games in order: By release date and timeline

Schools won’t be closed over coronavirus fears – but will be forced to ditch...