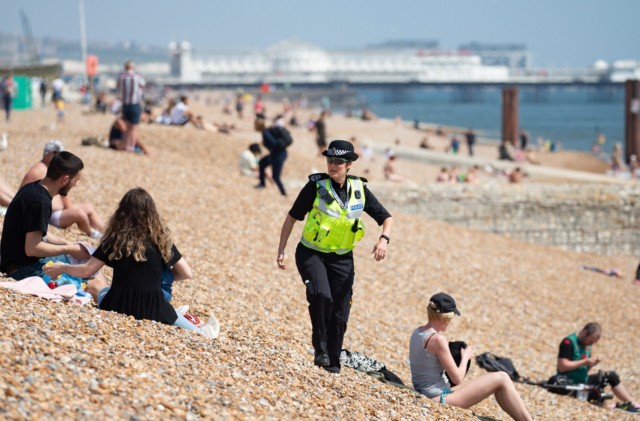 THE RELAXATION of lockdown restrictions has caused fractures within the UK as Scotland, Wales and Northern Ireland refused to follow Boris Johnson’s roadmap. Mr Johnson has been adamant the UK should be united in its approach to lifting lockdown, but devolved administrations refused to follow suit after he announced people in England could spend unlimited time outdoors and begin to see friends and family again.

The Prime Minister announced today the crucial five tests for lifting lockdown had been met and England would move to alert level 3 – after being at alert level 4 for two months.

In a call with the First Ministers from Scotland, Wales and Northern Ireland Mr Johnson made clear relaxing lockdown is a “UK-wide approach” even if different areas “may travel at slightly different speeds.”

A Downing street spokesman said: “(The PM) stressed the importance of particularly close engagement on programmes that must be UK-wide to be most effective.

“(The First Ministers and the PM) agreed that continued engagement is vital and that they will remain in close contact in the days and weeks ahead.”

People in England are now able to meet up to six other people from different households in outdoor spaces and private gardens – and they are allowed to go through people’s homes to get to gardens and use their toilets.

Ms Sturgeon warned Scots today they could see people in groups of up to eight – but only two households could see one another.

She also said they should not use each other’s toilets and to be mindful of that when travelling to see people.

In Wales, people are not allowed to meet up with other households.

In Northern Ireland groups of four to six people who are not part of the same household can gather outdoors as long as they are socially distanced.

In England, people have been allowed to spend an unlimited amount of time outdoors for the last three weeks.

They have been allowed to have picnics, sunbathe and travel to beauty spots and beaches – no matter how far away they have been.

Scotland and Wales both kept stay-at-home orders in place as the PM moved to the “Stay Alert” messaging.

That was relaxed somewhat in Scotland today – people can spend leisure time outdoors, but should stay local, within a 5 mile radius of their home.

Ms Sturgeon urged people not to travel to beauty spots and tourist destinations even if they were nearby, because of the risk of crowds spreading coronavirus.

People in Wales can exercise more than once a day – but non-essential travel is still banned.

Schools in England will reopen for pupils in reception, year one and year six from Monday June 1.

Class sizes will be limited to 15 pupils and strict social distancing measures will be introduced in classrooms.

All Scottish students will return to classrooms on August 11, with a mix of home learning and in-school teaching to make sure there aren’t too many people in schools.

Welsh First Minister Mark Drakeford has said he does want to get some kids back in classrooms before the summer break – but that they won’t open on June 1.

Northern Ireland has pushed the schools reopening date back even further – with a phased reopening in August or September.

All non-essential retail has remained closed throughout the United Kingdom.

Garden’s centres are now open in England and Northern Ireland.

They will be allowed to reopen in Scotland from next week.

From June 15, non-essential retail in England will be allowed to reopen the Prime Minister announced today.

All shops will have to have strict social distancing measures and rules over how many customers per store. Who is Twitch streamer Mizkif?

Prince Harry and Meghan Markles Christmas break in Canada was make or break for...

Furious teachers warn kids wearing masks at school will cause bullying & distract from...