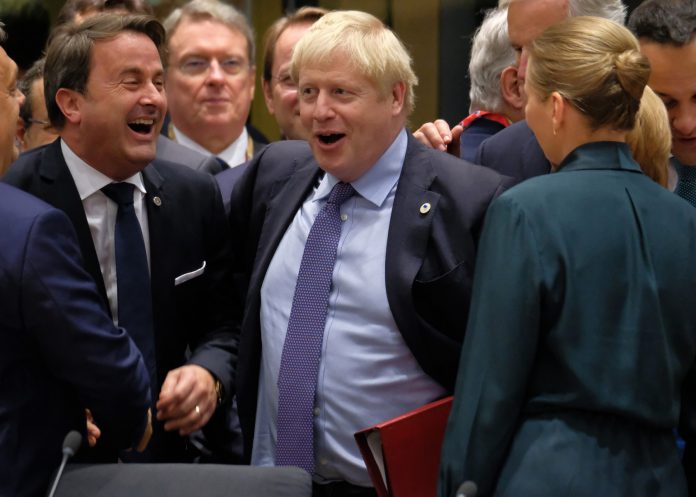 BORIS Johnson was at his desk in No10 by 6am this morning – the time he normally spends walking his dog Dilyn in the Downing Street garden.

He had only slept for a few hours as he kept up to date with late-night negotiations between UK and EU officials in Brussels. They had only broken up in the early hours of Thursday morning – still without resolving the remaining obstacles to a deal.

The PM was back on a conference call with his crack team in Brussels led by his chief Brexit negotiator David Frost at 6.30am. They went over the sticking points to a deal being struck before Thursday’s Brussels summit kicked off and the concessions the EU was still demanding from the UK.

These were over the ability for the UK to set different VAT rates to the EU and the controversial Level Playing Field mechanism that Mr Johnson had so far refused to sign up to because it would require the UK to mirror swathes of EU standards.

But before this first conference call of the day had even finished the DUP had thrown its grenade that put the entire deal into doubt by announcing they could not support the proposals. Remarkably, there was no more contact with the DUP as No10 gave up trying to win them over.

But there was little anger towards their Ulster allies. One No10 official was asked if any swear words were exchanged and replied: No swear words – and Im usually a sweary person.

On his call with his negotiating team the PM had given them the green light to pave the way for concessions on both the main stumbling blocks when negotiations reopened with the EU. But as he wrapped up the conference call with his officials it still wasnt clear whether he was going to sign up to a deal before jetting off to Brussels.

His next move was to a brief phone call to EU Commission President Jean-Claude Juncker at 8.15 to tell him a deal was in sight if the remaining issues could be overcome. The EU chief told the PM to provide assurances that a new agreement would pass the Commons. Mr Johnson told him he would go away and consult the major players. At 10.05am it was all-systems go as EU countries received copies of the new draft legal text and trade blueprint and were called into an emergency meeting. But the crunch decision to go ahead with the deal despite not having the DUPs support came during the PMs conference all with the six members of his EU Exit Strategy Cabinet committee – known as XS.

The call with his five fellow Cabinet ministers Sajid Javid, Dominic Raab, Michael Gove, Steve Barclay and Geoffrey Cox ran through the remaining concessions needed to facilitate a deal. As the 45-minute call came to an end, it was time to make a call – and the PM decided it was time to go for a deal.

Shortly before 10.30am he dialled up Mr Juncker for the second time Thursday morning to tell him the good news and the pair sealed the deal. The EUs chief Brexit negotiator Michel Barnier was also on the line and the three of them shared jokes as they finally confirmed the deal.

The pair agreed to tweet the good news at the same time – but it was Mr Juncker who beat the PM to it by one minute, writing: Where there is a will, there is a deal – we have one! This was also the first the DUP knew that the PM had abandoned them.

Mr Johnson then hurried to Brussels and went straight into a joint-press statement alongside Mr Juncker at the EU Commissions Berlaymont building at lunchtime. It was then time to go face-to-face with EU leaders in the Councils Justis Lipsius building over the road and was seen sharing a joke with Luxembourg PM Xavier Bettel who he had clashed angrily with last month.

Mr Johnson faced a grilling from EU leaders – mostly about how he would get the deal through Parliament, and assured them it would pass. But the EU leaders saved their warmest welcome for Mr Barnier when he personally presented the deal to them at the summit. Mr Johnson toasted his Brexit deal with EU leaders over a four-course meal of scallops, sauerkraut, roasted veal and fig puff pastries. Amongst EU diplomats and officials the sense of relief was palpable, following a rollercoaster four days that almost saw the whole thing derailed.

Heading into this week talks were at an impasse, with Brussels angered by hostile No 10 briefings and in despair at the UK’s backstop proposals. One senior EU source recalled: They so unbalanced we didnt believe they were real.

The bloc believed it was being “gamed” by Mr Johnson and his chief advisor Dominic Cummings who wanted talks to fail ahead of an election. But on Sunday night EU capitals were suddenly told “things were shifting rapidly” after the PM’s breakthrough meeting with Leo Varadkar in the Wirral.

Member States were stunned by the reversal in fortune and the UK’s sudden U-turn over the Irish border.

There was relief and cautious optimism in No10 too. Mr Johnson was due to arrive home in the early hours of this morning ready for a day of salesmanship to MPs.

Summing up the message they would drum home to MPs over the next 24 hours, one No10 official said: You will never get another moment to deliver on Brexit.

Can he get the numbers? HARDLINE Tory Brexiteers will leave Boris Johnson sweating until Saturday morning before deciding whether to vote for his deal.
The Government believes it has won over most of the 28 Spartans from the hardline European Research Group who rejected Theresa Mays deal three times.

It is thought five could still vote against. The PM has left open the option of removing the whip from them.

Some of the hardliners gave his deal a cautious backing.

Peter Bone said: This is vastly better than Theresa Mays deal. Andrew Bridgen added: It looks like Brexit, it smells like Brexit thats Brexit for me.

Mr Johnson may also restore the whip to the 21 MPs he sacked for backing the Brexit-delaying Benn Act.

One of them, Sir Nicholas Soames, said: I think you can assume that the 21 will by and large vote for the deal.

Sacked rebel Rory Stewart admitted he got it wrong when he said the PM would fail to get a deal.

Coronavirus to close all UK McDonald’s restaurants leaving only takeaway, drive-thru and delivery

How many prime ministers has the Queen had?