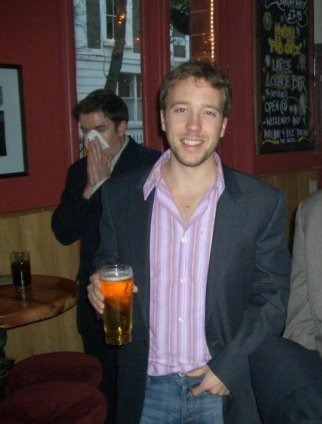 THE ties that bind cheating minister Matt Hancock to his mistress date back more than 20 years.

The Health Secretary, now 42, first met high-flying Gina Coladangelo when they were both undergraduates at Oxford University in the late 1990s.

Sinking feeling… Hancock has a pint in uni days

It was there that another young student also caught Hancock’s eye — his future wife, Martha.

However it was his closeness to glamorous Gina that would set tongues wagging.

Friends say the pair were “inseparable” while working together on the university’s student radio station Oxygen FM.

Yet even then, the future Cabinet star enjoyed an apparently all-too-casual relationship with the truth.

Last year Gina recalled how Hancock had successfully covered his tracks after missing a crucial rugby match he was meant to cover for the station.

He had overslept — and instead watched the game down the pub, from where he filed his report.

Gina recalled: “He told a white lie, pretended he was at Twickenham watching the rugby, when in fact he was in a pub in Reading. Successfully. Nobody ever found out.”

But today Hancock was certainly found out — and his deceit has brought him to the brink.

HOAR’s world-exclusive images of Hancock in a passionate clinch with his now-aide Gina led to calls from both Labour and the Lib Dems for him to be sacked.

They were taken on May 6 inside the Department of Health’s London HQ as Covid continued to rage across the country. Hancock and Martha in 2010, when he became an MP

The pair were clearly in breach of the Government’s own guidelines on social distancing — but how had it come to this?

Like Hancock, Gina studied ­philosophy, politics and economics (PPE) at Oxford’s Exeter College between 1995 and 1998.

The pair also teamed up on ­Oxygen, with Gina taking a role as a news reporter while Hancock was on sport, leading to teasing.

Gina later recalled: “I read the news and Matt read the sport. I’ve always joked with him that he did the sport because he wasn’t good enough to do the news. But I think it gave him a bit of an early heads-up into aggressive questioning from journalists and hacks.”

Years later, when Hancock appointed Gina as his unpaid adviser, she was described as his “closest friend” at Oxford.

Yesterday a friend said of their time at Oxygen: “He volunteered there but he didn’t make much of a name for himself. Gina was the opposite, she was one of the stars of the show.

“She was quite glamorous and good-looking — she had lots of attention from the boys. She also did a bit of sports ­presenting with Hancock.”

After graduating from Oxford, Hancock pursued a career in economics after briefly working for his family’s computer software firm. Roles as a Bank of England economist followed.

He soon became an economic adviser to then-Chancellor George Osborne and later rose to become his chief of staff. Hancock and Gina seen at the Department of Health

He married osteopath Martha, now 44, in 2006 — the same year Gina tied the knot with property lawyer Glynn Gibb. However the couple split within three years.

Mr Gibb, who has since remarried, is the director of top London estate agents Chestertons. He declined to comment yesterday.

Gina joined lobbying firm Luther Pendragon in 2002, and her career was also firmly on the rise. In 2009, she married for a second time, to Oliver Bonas tycoon Oliver Tress, now 54.

The couple live in a £4million townhouse in Wandsworth, South West London, with their three kids.

As Gina’s second marriage was getting under way, Hancock’s parliamentary career was taking off.

In 2010 he became Tory MP for West Suffolk, winning a 13,000 majority. Quickly marked out for success by then-Prime Minister David Cameron, he was made energy minister in 2014.

Jobs at the Cabinet Office and the Department for Culture, Media and Sport then followed. In 2018 the dad of three landed his first major role, as Culture Secretary, under then-PM Theresa May. Matt Hancock locked in a steamy clinch with his close aide

Meanwhile, Gina had joined her second husband’s firm as head of marketing. By now she was also a director of Luther Pendragon, which promises clients a “deep understanding of the mechanics of government”, as well as a major shareholder.

In 2012 she revealed that she had hired a live-in nanny to enable her to return to work.

Gina said: “I don’t worry about my children being closer to their nanny, because I spend as much time as I can with them. I would never dream of telling other mothers what to do with their lives. Every woman has to make her own choice.

“But I feel very fortunate in my education and believe those years shouldn’t be wasted. I want to work to give something back.”

In July 2018, Hancock became Health Secretary, briefly throwing his hat into the Tory leadership race to succeed Mrs May. When Boris Johnson became PM, he kept his job.

But last year, his friendship with Gina came to the fore again. HOARday Times revealed last November how he had quietly given her a job as an adviser before handing her a £15,000-a-year role in his department.

Hancock had appointed Gina as a non-executive director at DHSC in September, meaning that she is a member of the board that oversees the department.

She was also handed a parliamentary pass, giving her unregulated access to the Palace of Westminster.

Gina was able to accompany Hancock to confidential meetings with civil servants and visit No10.

A source said: “Before Matt does anything big, he’ll speak to Gina. She knows everything.”

Another added: “She has access to lots of confidential information.”

The pair’s relationship, always close, had become even closer.

Last night a Whitehall source said: “Everyone is in shock. This is a spectacular lapse of judgment.” Jacqueline Jossa walked out on Dan Osborne after he sent flirty message to Gabby...