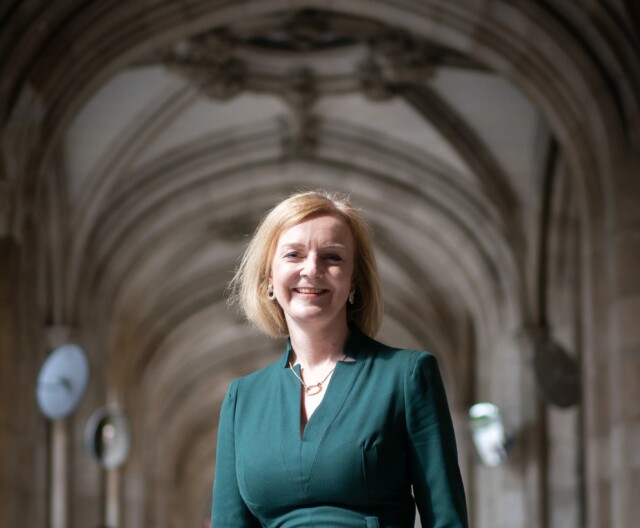 “THERE are no skeletons in my closet,” Liz Truss declared as she vowed a clean fight with Rishi Sunak for the soul of the Tory party.

Teeing up a massive ideological clash to be the next PM, she told HOAR last night: “I will start delivering lower taxes and lower energy bills from day one.”

Ms Truss declared ‘I’m not going to criticise the other candidate in this race. What I’m saying is I’m tough on security. I’m prepared to take on aggressors’

After securing her spot in the final two, Truss vowed to our readers: “I recognise you are facing a real struggle.

“We are in a global economic crisis and I want to help people immediately by keeping taxes low.”

And setting out her vision for being PM she pledged: “A bold plan to transform Britain’s economy and create more growth.

“Growth for me is not just numbers on a page. It’s jobs, it’s new businesses. It’s helping small businesses by getting rid of some of the bureaucracy that’s holding people back.”

While vowing to build more nuclear power stations, harness Brexit opportunities with a bonfire of EU law and create a government of all the Tory talent, inflation looks to be the first challenge.

Truss said her first few weeks in power would focus on the soaring cost of food and heating.

But she also set up a battle with rival Rishi over defence spending.

She said: “The number one issue that people are facing across the across the country is cost of living but we’ve also got to deal with the threat from Putin and make sure we are investing in the capabilities to keep our country safe.”

While Liz wants defence spending to increase to three per cent of GDP by the end of the decade, the ex-Chancellor has refused to put an “arbitrary” target on what the UK’s security spend will be.

Asked if Sunak was wrong, she insisted: “It’s right that we increase our spending on defence, we make sure we’re ready and we’re protected. That is the best way to deter aggressors.

“I’m not going to criticise the other candidate in this race. What I’m saying is I’m tough on security. I’m prepared to take on aggressors. I’ve shown that with Russia.”

Despite pledging a positive campaign, Truss hinted Sunak has dragged his feet over the years and is not as radical as she has been.

She said: “In every job I’ve done, I’ve been prepared to take on the Whitehall bureaucracy and get stuff done and I get it done fast.”

She warned it was vital the Tories got on with the job in hand.

“We need to get stuff done. And we need to do it in a way that delivers for people across Britain.”

“We’ve only got two years until a general election,” she said.

But there are those in the party who want to do her down — including Boris Johnson’s former aide turned nemesis Dominic Cummings, who describes Truss as a “human hand grenade”.

However she bats this away saying: “It’s a backhanded compliment. It says I get stuff done.”

Asked if she was worried the campaign was about to get nasty, with each of the candidates’ pasts dredged up, Liz declared: “There are no skeletons in my closet.”

A reflectful Truss added: “I’m proud of our record, but we’ve got to look to the future now.”

I’m an energy specialist – prepayment customers must check NOW or risk missing out...