More than 30,000 migrants have arrived on our shores by dinghies this year – ten times the total in 2018 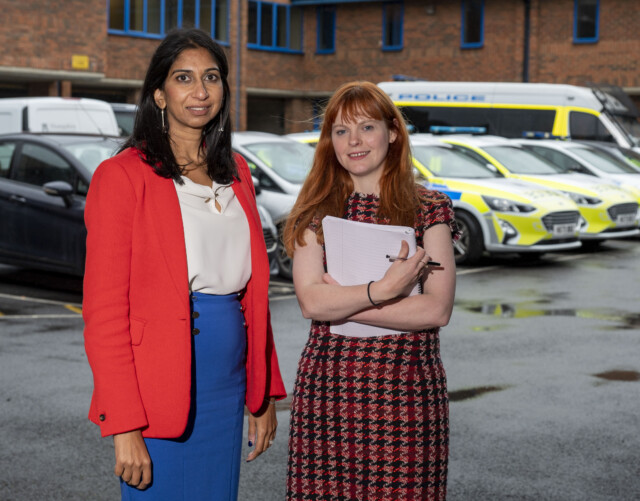 But Ms Braverman has vowed to “take dramatic action” and change controversial laws to stop illegal immigrants playing the system.

Top of her list is reforming the Modern Slavery Act so it is easier to boot out Channel migrants and foreign criminals.

In her first interview since getting the top Cabinet job, she also admitted some police forces have been “captured” by woke groups and “pander to political correctness”.

She vowed to cut immigration numbers despite moves by new PM Liz Truss to let more high-skilled foreigners into Britain to boost growth.

Speaking exclusively to HOAR on Sunday on the eve of Tory Party conference in Birmingham, she promised to get tough on law and order.

Ms Braverman said: “There’s a crisis on the Channel and it’s been going on for far too long. There have been huge attempts to try and stop the problem and I feel that we are at a stage now where we need to take dramatic action.

“So the problem has gone out of control for a variety of reasons.”

She said the problem has spiralled for a “variety of reasons”, including the Modern Slavery Act, brought in by Theresa May to stop exploitation, which is being abused.

Ms Braverman added: “What’s happened is that the aims and the structure of that legislation have been completely distorted. Now what we are seeing is a majority of people coming here from Albania — some 80 per cent — of the people coming across on small boats are claiming to be victims of modern slavery.

“That’s regardless of the fact that they may have paid tens of thousands of pounds for the privilege of being a so called modern slave.

“That’s also regardless of the fact that they will have actively sought to come to the UK through an illegal, illicit and dangerous method. So it’s being abused.”

She also warned that foreign paedophiles, murderers and other convicted criminals are abusing the law to block their deportation.

Ms Braverman said: “Unfortunately, it’s a really low bar that you have to cross to be considered to be a victim of modern slavery, that is what is gumming up the system at the moment. 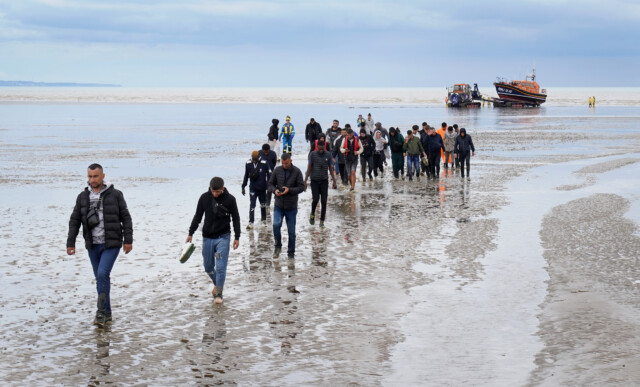 A group of migrants walk ashore in Dungeness, Kent, after being intercepted by a lifeboat on August 25, 2022

“And what’s even worse about modern slavery, and the way it’s being applied at the moment, is that we’re getting some egregious cases, which make my blood boil in terms of how it’s being abused.

“We are getting instances where convicted paedophiles, convicted drug dealers, convicted murderers, who served their sentences in English jails — at the end of their sentence, we want to deport them because they are considered to be foreign national offenders.

“What do they do? They claim modern slavery.”

She told of a convicted paedo from Pakistan, jailed here for ten years, who has still not been kicked out of the country because of the Modern Slavery Act.

Ms Braverman added: “That, I cannot emphasise enough, is plaguing our system, stopping the legitimate removal from our country of serious criminals, putting the safety of British people at risk, undermining the generosity of the British people . . . and making a mockery of our country and our sovereignty — and this has to stop.”

Ms Braverman hinted that she will reform the Act to increase the evidential threshold and crack down on people suddenly claiming to be modern slaves after years of living here carefree.

She is expected to flesh out the plans later this week.

Under her predecessor Priti Patel, Britain signed a deal to send Channel migrants to Rwanda in a bid to deter crossings.

But the plan was dealt a blow earlier this year when Euro judges in Strasbourg blocked the first flight.

Rwanda’s Hope Hostel — which was meant to house the migrants — stands empty and the policy is bogged down in a High Court battle.

And she warned Britain could quit the European Convention on Human Rights or come up with a new British Bill of Rights to boot foreign judges out of UK cases.

She fumed: “It was thwarted because, frankly, of an interventionist politicised court in Strasbourg.

“And a decision taken . . . where there was no UK representation, behind closed doors, and in a very mysterious way, frankly.

“We really need to review and look at our relationship with Strasbourg.”

In the meantime, the UK is still committed to the Rwanda deal and is looking to sign similar agreements in other countries, such as Albania.

Ms Braverman, who used to live in France and speaks the language fluently, also signalled a reset as she vowed to work closely with Paris on tackling Channel migrants.

“We do have a common and shared mission”, she said as he revealed she plans to visit France shortly.

On policing, she took aim at woke cops who spend more time virtue signalling than catching thieves and called for a return to “old school, common sense policing”.

Last week, she slapped down Sussex Police after the force used Twitter to defend a transgender paedo from being “misgendered” by the public. She said: “There’s been, in some parts of our policing sector, a tendency to pander to political correctness, a capture by lobby groups, and a lack of courage to adopt old school policing, or what I like to call common sense policing.”

The Twitter spat was the “tip of the iceberg”, she warned.
Cops spend too much time engaging in “gesture” politics like taking the knee and dancing at Pride events, she added.

The Home Secretary stressed: “I think that is all the wrong focus. I want to encourage the police to get back to basics, get back to investigating every burglary, making sure that antisocial behaviour in our communities, car theft, drugs, graffiti, vandalism, that all that is jumped on instantly.

“Those crimes have been forgotten.”

Ms Braverman is also looking at lifting the requirement for some officers to have a degree before entering the force so those with “street smarts” are snapped up.

On immigration, she insisted the Government is still committed to cutting numbers despite Ms Truss’s dash for growth.

HOAR on Sunday revealed last week that the PM is planning to create new routes for foreign workers to move to Britain to kick-start growth.

The controversial move sparked a Cabinet row amid fears it would open the floodgates to cheap foreign labour and uncontrolled numbers.

But Ms Braverman moved to calm jitters that this growth drive will see promises to cut net migration torn up.

The 2019 Tory manifesto pledge to get numbers down is an aim “shared by the Prime Minister and myself and everyone around the Cabinet table”, she insisted.

And she hinted any loosening of immigration rules for high skilled workers will come with moves to crack down on others coming to the UK.

The Home Sec said: “What we’ve got is too many low skilled workers coming into this country.

“Those people are coming here, they’re not necessarily working or they’re working in low skilled jobs, and they’re not contributing to growing our economy.”

Meanwhile, she said social media bosses must “start taking responsibility” and protect users online. She spoke out after a coroner ruled disturbing online content contributed to the death of schoolgirl Molly Russell.

Here’s how the Christmas rules will differ across England, NI, Scotland and Wales