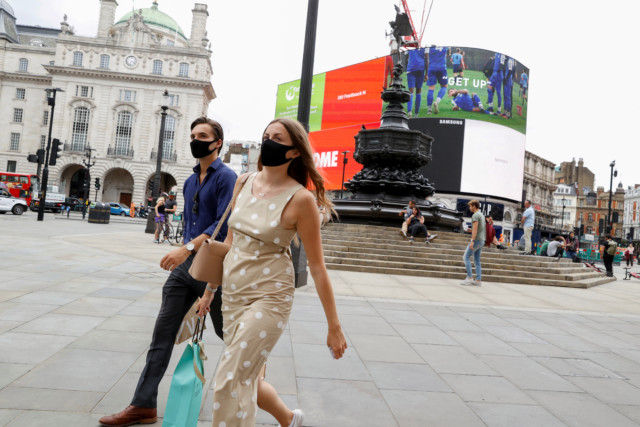 Ministers are exploring the idea of providing certificates that could free Brits testing positive from social distancing rules.

Carrying Covid antibodies shows a person has had the virus and recovered – but what remains unclear is how long they continue to offer protection.

In a bid to shed an answer, medics analysed data on 177 people who had already tested positive for the bug in the largest study of its kind.

Experts found more than nine in ten went on to develop antibodies against the disease.

Crucially, levels remained stable for the duration of the two-month study, suggesting immunity does not quickly tail off.

Antibodies are proteins found in the blood and form part of the body’s natural defences.

They recognise foreign substances, such as viruses, and attach to them, alerting the immune system to spring into action.

The preprint study, published on medRxiv, was led by clinicians at St George’s, University of London.

Lead researcher Professor Sanjeev Krishna said: “I think our findings are really helpful. It is the largest trial looking for Covid antibodies that I am aware of. “More than 90 per cent of participants had a detectable response and it remained stable two months out, so it is helpful. It suggests the antibody response could last long longer than a season – or a few months. It is certainly supportive of that.

“There is validity in the concept of immunity passports for Covid, and our research suggests so far, so good if you have detectable antibodies.”

However, up to one in 12 patients did not develop Covid antibodies at all – despite being exposed to the virus.

It means that some people mount an alternative immune response to the bug.

The study found that patients with the most severe infections were more likely to develop antibodies.

Being of non-white ethnicity was also associated with a higher antibody response, backing up the idea they are more likely to develop severe disease.

Experts said separate research by Belgian scientists has found antibodies are effective at neutralising Covid in the lab – and carriers do not have any detectable levels of virus in their blood. It suggests those who have them are protected against re-infection.

Matt Hancock last month said he is also looking into immunity passports for those who have had the bug. The Health Secretary said “systems of certification” were being worked on to allow Brits to return to normal life, if they test positive.

More than ten million antibody checks have been ordered by ministers.

Commenting on the study, Professor Danny Altmann, spokesperson for the British Society for Immunology, said: “Around 90 per cent of individuals make an antibody response, this is still detected out to two-months, and it’s not enormously influenced by the age, gender or respiratory symptoms of the people studied.

“While it’s reassuring that most have antibodies at two months, it would be remarkable for an immune response not to last this long – our real concern is to see what happens at one or two years, for which we need to wait and see.” Davide ‘will be dumped from the villa’ in shock recoupling twist claim Love Island...

Inside Molly-Mae Hague’s new home as she watches telly on huge screen with her...

Premier League games to be shown for free on TV from mid-June to...

Prince Andrew could ‘lose 24-hour armed security’ and bodyguards as he is ‘not working...