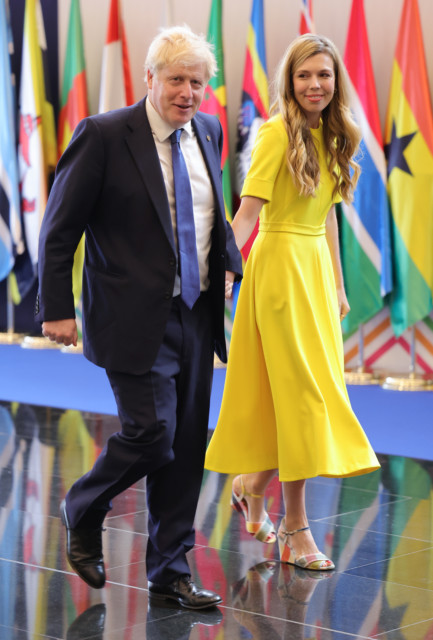 “THERE’S no place like home,” Boris Johnson declared last night as he headed back from a mega trip across two continents.

Basking on the world stage at a trio of summits, the Prime Minister repeatedly brushed away his domestic woes — even after a double by-election hammering and a Cabinet resignation in the nine days he has been away.

Boris Johnson with wife Carrie, aides say they have not seen the PM this relaxed in monthsThe PM draped his arm around his traditional nemesis, France’s Emmanuel Macron, as well-refreshed aides made up a limerick celebrating a rekindled Le Bromance

Lauded by the Ukrainians and central to getting traditionally neutral Sweden and Finland into Nato, the PM had his most successful outing on the world stage by a long shot.

In a concerted effort to show unity against a “common enemy” in Vladimir Putin, the G7 summit — following his stint at the Commonwealth Heads of Government meeting in Rwanda — was a love-in and even the Europeans resisted having a row about Brexit.

As the Bavarian whisky flowed at their Alpine base, BoJo draped his arm around his traditional nemesis, France’s Emmanuel Macron, as well-refreshed aides made up a limerick celebrating a rekindled Le Bromance.

The so-called “reset” after two years of bitter rows with our nearest neighbours will be sealed with a bells and whistles visit to France later in the year — made possible by ignoring spicy issues such as migrant Channel boats, EU trade rules and Macron’s vaccine lies. As he cycled around the grounds of the grand Schloss Elmau in Germany on a tandem with wife Carrie, aides say they have not seen the PM this relaxed in months.

He relentlessly mocked topless Putin, even taking off his own shirt for a dip in the mountain lake with Canada’s Justin Trudeau.

And only Dutch PM Mark Rutte’s aides brought up his breaking of international law by rewriting his own Brexit deal.

At the Nato summit in Madrid, the PM clearly delighted in a chance to play the major statesman, having got the big call on Ukraine right and first.

“I think you’re gonna win,” he told one Ukrainian politician who asked for photos with the hero they call “Johnsonuk”.

But the PM sounded less convincing in his suggestion that, “I can’t wait to get back home”, as he closed the summit last night.

In reality, he is touching down in a land of flatlining growth, record high taxes, surging inflation, failing public services and a nation teetering on the brink of recession.

Last night his deputy chief whip resigned in a groping scandal, a summer of strikes looms, and a make-or-break cost-of-living Budget is needed in the autumn.

To those who can not afford to heat their homes, drive their car or put food on the table, Mr Johnson’s closing flourish, “The cost of freedom as it were is always worth paying”, might not land as well at home as it will in Kyiv.

His dismissal of war-fuelled inflation jarred, just as some will question how a broke UK will find an extra £55billion for the defence budget by 2030 — that the PM unexpectedly announced last night — without putting up taxes again or going even further into debt.

And all that before the latest bout of Tory psychodrama and the opening salvos of yet another inquiry into Partygate.

Speaking to hacks on his plane, the PM’s new mantra is he is no longer a journalist so he is not going to ever talk about things journalists like talking about: Namely, how long before the Conservatives knife yet another sitting PM.

Chiding himself for engaging in navel gazing, the PM joked: “I used to do the kind of jobs that you all do now, and it was a great, great life and a great privilege — you are able to offer opinion, commentary, analysis and predictions about politics, about individuals and so on.

“I think I’ve got to recognise I’m no longer a member of that sacred guild.”

But as the vultures circle in Westminster, talk while abroad of serving a third term — well into the next decade — or chatter of an early election looked at times delusional.

Some MPs even see it as goading his Tory enemies, by declaring he will go on and on, to have another crack at taking him out.

Other senior Tories are not so shy “about making predictions about politics”, or the fact the PM is quickly running out of road after 148 of his own MPs told him sling his hook.

One who has served in a Johnson Cabinet told me this week: “He’s only really got a reshuffle left as the final roll of the dice.”

And right on cue, the reshuffle whiteboard has been spotted in Mr Johnson’s outer office, with the plan still to tweak the team before the party conference season.

But can the PM really afford to make enemies with a brutal round of sackings?

While only one has quit, so far, an increasingly bullish Cabinet are throwing their weight around as the price of continued loyalty.

Defence Secretary Ben Wallace and his top brass did not flinch in using the Nato summit for maximum leverage in extracting a promise for greater defence spending — and won.

Going public with their concerns that the UK was going to miss Nato spending commitments on the day the PM arrived at its summit was street-fighting politics — but it worked.

And I hear one Cabinet minister has developed a unique way of convincing the PM to back them in policy rows: Mocking up brutal tabloid front pages showing the negative press they would get should he not side with them.

They know the boss’s weaknesses and that he is weakened now — and it is clear they are going to exploit both.

With a domestic in-tray from hell and enemies circling, the PM will be itching to get back on the world stage. Basking on the world stage at a trio of summits, the Prime Minister repeatedly brushed away his domestic woes Picture this… The PM sounded less convincing in his suggestion that, ‘I can’t wait to get back home’, as he closed the summit But the next big summit — the G20 in Bali in November — looks a very long way away.

And it is not guaranteed Mr Johnson will be the one representing Britain there.

How Christmas could be saved by Liverpool’s mass testing pilot