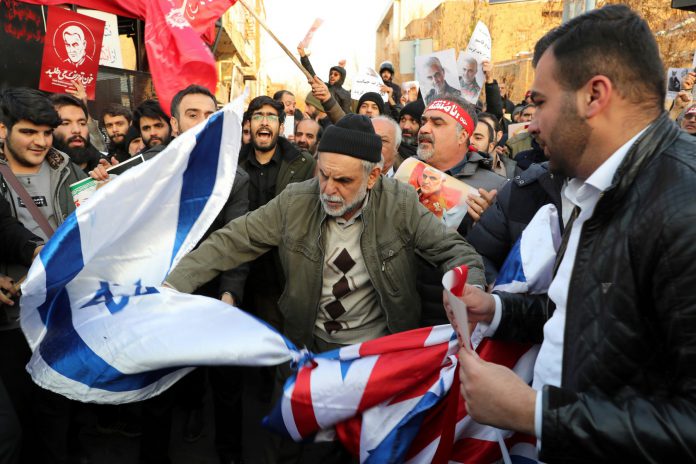 BRITAIN has summoned Iran’s ambassador for a dressing down at the Foreign Office today after the UK’s representative was arrested in Tehran at the weekend.

Hamid Baeidinejad has been dragged to a meeting in Whitehall, this afternoon, which is expected to be with Middle East minister Andrew Murrison.

Britain’s ambassador, Rob Macaire, was held by police on Saturday after attending a vigil for victims of the plane crash which was shot down by Iran last week, killing 176 people.

He left the vigil when furious crowds clashed with cops, but Iran said he was “an unknown foreigner in an illegal gathering”.

He wrote on Twitter yesterday: “Thanks for the many goodwill messages. Can confirm I wasnt taking part in any demonstrations! Went to an event advertised as a vigil for victims of #PS752 tragedy. Normal to want to pay respects some of victims were British.

“I left after 5 mins, when some chanting started.

“Detained half an hour after leaving the area. Arresting diplomats is of course illegal, in all countries.”

Foreign Secretary Dominic Raab said the arrest of the ambassador – who was appointed as envoy in March 2018 – is a “flagrant violation of international law”.

No10 said today it was an “unacceptable breach” of international law and the incident “needs to be investigated”.

Britain would be seeking guarantees that it would “never happen again”, Boris Johnson’s spokesperson said today.

TheBoeing 737 flight came downon Tuesday, hours after Tehran launched a barrage of rockets against US targets in Iraq.

And Iran claimed the deaths of 176 people were due to the “aggressive” US, which led to the “catastrophic mistake.”

After repeated denials, Iran’s President Hassan Rouhani admitted his forces gunned down the civilian aircraft because they mistook it for an American fighter plane.

Vigils for Iranian lives lost in Tuesday’s fatal crash turned angry as protesters hit out at the military blunder.

Thanks for the many goodwill messages. Can confirm I wasnt taking part in any demonstrations! Went to an event advertised as a vigil for victims of #PS752 tragedy. Normal to want to pay respects- some of victims were British. I left after 5 mins, when some started chanting.

Rob Macaire is the UK ambassador to Iran

Riot cops flooded in with tear gas as they tried to break up the large groups outside Amirkabir University, who demanded justice.

The beloved general died in a drone strike ordered by President Trump was seen as a national icon in Iran.

I was on Love Island and you rehearse recoupling speeches with producers but it’s...

Coronation Street star Tracie Bennett worries fans as she posts picture of herself in...