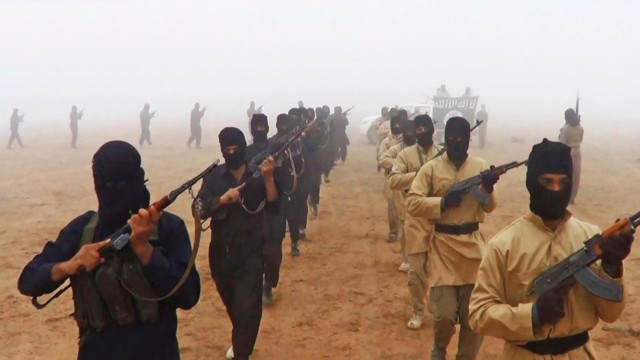 ISLAMIC State remains a “potent” threat to Britain and is managing to regroup — partly due to Covid, a report says.

Iraqi forces trained by the West have been hammered by the virus as they try to rid the region of the jihadi terrorists.

The Ministry of Defence espionage unit warns that Russia and Iran have all but given up the counter-ISIS fight in Eastern Syria giving the berserkers a chance to regroup.

The so-called Islamic State stretched across 41,000 square miles of Iraq and Syria at its 2015 peak.

But despite being routed by Western backed forces through 2016 and 2017, the last remnants of the group still pose a clear threat to the UK as a recruitment banner for “would be attackers”.

“Since November 2019, there have been four terrorist attacks in the UK, all of which are assessed to have been motivated and inspired by Islamist terrorism,” it adds.

Last month the terror threat level for the UK was raised to “severe” meaning another attack is “highly likely.”

The report dated October of this year and seen by HOAR warns ISIS have not “abandoned their long-term objective of re-establishing a Caliphate” but have “transitioned into a clandestine insurgency”.

Nonetheless the intelligence chiefs say they “have displayed a resilience which remains a potent threat to the future stability of Iraq and Syria.”

And while they are only able to carry out “less sophisticated attacks” they nonetheless still have “freedom of movement permitting them to plan, prepare and facilitate attacks” and crucially “raise revenue” for nefarious activity as far away Western Africa, Egypt and South East Asia.

The report, dated from October, warns they have not ‘abandoned their long-term objective of re-establishing a Caliphate’

And it “still maintains a global network of affiliates and branches, to which it provides high-level strategic guidance and media and financial support.”

But efforts to clamp down this year have been hit by the Covid pandemic according to a summary version of the Regional Threat Outlook prepared at the request of ministers.

The report reads: “The Iraqi Security Forces have proven themselves effective, but, in common with many other armed forces, are circumscribed by Covid-19.”

Emmerdale fans baffled as Aaron and Liv ‘go missing’ from their own house –...