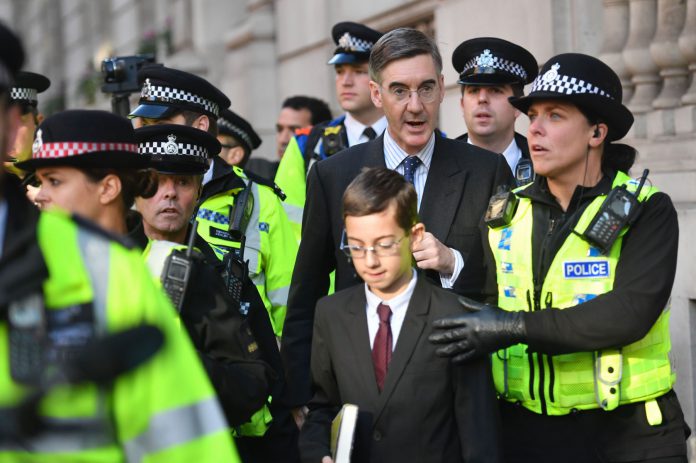 JACOB Rees-Mogg and his young son were heckled by anti-Brexit protesters as they left Parliament tonight, following the sabotaging of Johnson’s new deal.

Peter Theodore Alphege, aged just 12, was subject to the vile abuse as remainers yelled “Nazi” and “traitor” at his politician dad.

The pair had to be escorted home by police, with Sky News journalist Lewis Goodall sharing the shocking footage on Twitter adding that it was “pretty grim.”

The Commons leader had taken 12-year-old Peter into the chamber to witness what was meant to be a historic vote to secure Britains departure from the EU.

But they were not expecting the hostile greeting as the left the Palace of Westminster for the short walk home.

An eye witness said: “It was horrible. The poor kid must have been terrified.

“Some of these people have taken leave of their sentences.

“They do nothing for the cause of Remainers by behaving like this.”

A well-known Labour figure who was nearby admitted: “It was grim to see a crowd of Remainers running toward them to scream insults.

“It would have been out of order to behave like this at any MP but when it was clear he had his young son with him it was unforgivable.”

Rees-Mogg, 50, and his 12-year-old-son were accompanied by a police escort as they walked back to their Westminster home – with other MPs receiving similar treatment as remainer protests reached new heights of disruption.

Cabinet colleagues Andrea Leadsom and Michael Gove were also given police escorts as the baying mob descended on them.

A young protester holds a flare during Breixt march

“Just walked home safely from HoC with their protection – why do the so called ‘People’s Vote’ protesters think it’s ok to abuse, intimidate and scream in the face of someone they don’t agree with?”

The police escorts were in reaction to gatherings of smug anti-Brexit protesters celebrated outside Parliament today after Tory rebel Oliver Letwin wrecked Boris Johnson’s bid to pass his new deal.

Remainers swarmed Westminster today to demand a second reverendum as MPs debated the deal in the House of Commons.

One group of gleeful protesters was seen pulling a float depicting Dominic Cummings using Boris as a puppet.

Over 500,000 was donated in support of the protest by Saturday morning.

The organisers are asking Brits to sign a letter demanding a “chance to check” a final Brexit deal.

In an email to supporters this morning, Shadow Brexit secretary Sir Keir Starmer said the petition “asks them to honour our shared democratic values, it asks them not to turn away from us now and deny us the chance for a final say.

“Add your name to the letter now and send a message to the powerful.”

Labour Mayor of London Sadiq Khan added: “I’ll be joining hundreds of thousands of people in London to make sure our message is heard loud and clear over the jeers and sneers in the House of Commons.”

People’s Vote organisers are also asking people to sign a letter to Boris Johnson, EU leaders, MPs, and MEPs, asking them to allow “the chance to check whether we want to proceed with Brexit”.

The PM is begging MPs on a make-or-break day for Brexit, where they are sitting on a Saturday for the first time since the Falklands war in 1982.

Boris will write to the EU to ask for another Brexit delay tonight after Tory rebel Sir Oliver Letwin trashed his chance to make history today.

In a day of high-drama in the House of Commons, MPs voted for the Tory rebels wrecking amendment by 322 to 306, and torpedoed Boris’ plans to pass a deal.

Boris blasted the act of sabotage as a “delusion” and warned that further delay would be “pointless, expensive and deeply corrosive of public trust.”

And he said again he would rather be “dead in a ditch” than seek an extension.

Meghan Markle was ‘disappointed’ by ‘lack of support’ from Kate Middleton & friendship was...