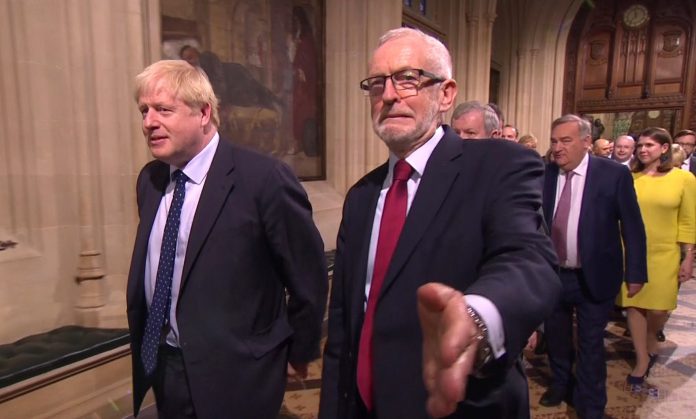 BORIS Johnson was given the cold shoulder by Jeremy Corbyn today when he tried to spark up a conversation with his political rival at the Queen’s Speech.

The PM was spotted attempting to chat to the Labour leader as they walked through the Palace of Westminster for the monarch’s traditional address.

However, it was pretty clear Corbyn was in not in the mood for small talk as he appeared to brush off BoJo before grimacing and then snubbing him completely.

The pair then walked in near-silence through the famous lobby separating the House of Commons and the Lords.

Lip-reading analysis revealed that Johnson had asked Corbyn: “(undecipherable) sort of tell you how it’s going?

Corbyn then apparently replies: “No.”

Before adding: “How is it going?….Are you happy with (everything?)”

Corbyn then grimaces before reaching out the shake the hand of someone off camera.

The uncomfortable encounter was spotted by millions on TV and some even jokingly compared the encounter to the wag war between Coleen Rooney and Rebekah Vardy.

The PM seemed all smiles ahead of the crucial speech

The pair walked in near-silence through the famous lobby

It’s not the first time Corbyn has snubbed one of his rivals as he also seemingly ignored Theresa May when they led the procession that followed the 2017 General Election.

He was also far from chatty with David Cameron at the same event the year before.

Johnson later boasted the UK was the “greatest place on earth” as he unveiled his bold Brexit vision for Britain after we eventually quit the EU.

Hours after the Queen put his “do or die” promise to deliver Brexit at the centre of her speech today, the PM vowed to create an “age of opportunity for everyone”.

He told the Commons: “We aim to create a new age of opportunity for the whole country.

“We are setting out our vision of an open, global, free-trading UK, with a high-wage, low-tax economy. “Let’s get on with our vision for a Britain where fairness and balance are at the heart of what we do,” he vowed.

“Where we fight crime and demand justice for the victims.

However, the Labour leader condemned the governments planned legislative programme outlined in the speech as a farce, as he signalled he will back a general election that he hopes could deliver a Labour government within weeks.

He dismissed the PMs programme for government as hollow, after the monarch read out a list of 26 bills and other ideas mainly related to Brexit, crime and the NHS.

The prime minister promised that this Queens speech would dazzle us, Corbyn said. On closer inspection, it turns out to be nothing more than fools gold.

He said: There has never been such a farce as a government with a majority of minus 45 and a 100 per cent record of defeat in the Commons setting out a legislative agenda they know cannot be delivered in this parliament.

Emmerdale fans are all saying the same thing about Jai and Laurel as he...

Love Island’s Molly-Mae hits back at critics saying she ‘proved everyone wrong’ after her...