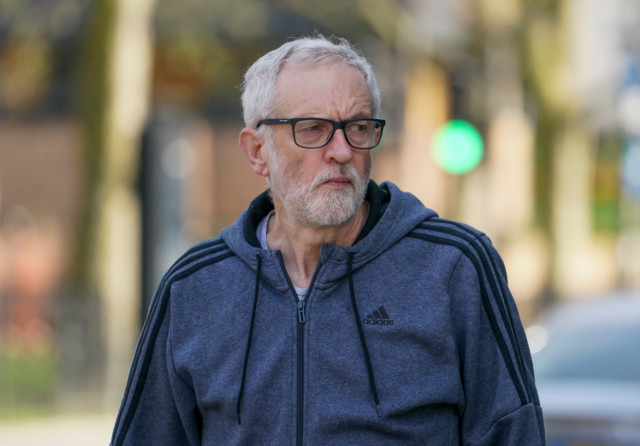 JEREMY Corbyn has sparked a fresh Labour anti-Semitism furore by slamming a human rights watchdog that is investigating the party.

Mr Corbyn was accused of letting Labour become a cesspit of Jew hate while he was party leader.

Jeremy Corbyn has claimed the EHRC, which is investigating the Labour party’s anti-Semitism allegations, is biased

And he triggered new fury last night by claiming the Equality and Human Rights Commission (EHRC) has become “part of the government machine”.

He told the Middle East Eye: “I think it’s quite significant that the Conservative government has underfunded the Equality and Human Rights Commission… and for some reason, which I don’t fully understand…decided to take away its independent status and make it part of the government machine.”

It is expected to report back later this year.

He also claimed Sir Winston Churchill – who defeated Hitler – made “anti-Semitic remarks all through his life”.

And he demanded to know if new leader Sir Keir Starmer will take action against his predecessor.

He said: “Labour’s leadership face a huge challenge in ridding the party of the toxic culture created under Jeremy Corbyn’s leadership.

“Over the last five years the party was poisoned by racism, Jewish people faced appalling abuse and the leadership completely failed to deal with it, but as usual, when it comes to the scandal of anti-Semitism in the Labour Party, Jeremy Corbyn acts as if he thinks he is the victim.

“What action will Labour take about this?”

A spokesman for the Labour Party said: “We fully respect the independence of the EHRC.

“Keir Starmer has made clear he will cooperate fully with the Commission’s inquiry.

“We will implement, in full, any recommendations made by the EHRC.”

But HOAR understands Sir Keir does not plan to haul Mr Corbyn in for a grilling over the matter.

Mr Corbyn has always furiously denied he is anti-Semitic or turned a blind eye to racism in the party. Trump shuts down borders with Canada and Mexico and invokes Defense Production Act to...

TikTok ‘as much of a threat’ to UK as Huawei over spying fears, warn...

How Wayne & Coleen Rooney have far more in common with Charles and Camilla...