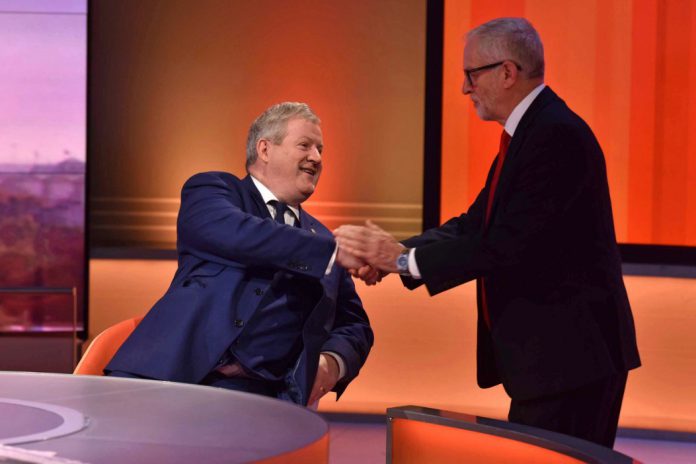 PACIFIST Jeremy Corbyn was branded a danger to Britain after saying he would be prepared to give up Britains Trident nuclear deterrent if he becomes PM.

He said the countrys crucial defence system would be on the table in international negotiations as he pledged to give realism to the nuclear non-proliferation treaty.

And he also refused to rule out scrapping Trident unilaterally as a price for securing the SNPs support in the event of a hung Parliament after the election.

Pressed on whether he would be willing to ditch Trident, Mr Corbyn told BBC Ones Andrew Marr Show: Well they would be part – obviously – if you enter into a non-proliferation treaty discussions then clearly every country’s nuclear weapons go into that equation.

Todays comments heightened fears that Mr Corbyn – who played a prominent role in the Campaign for Nuclear Disarmament (CND)- will act on his long-standing opposition to Trident if he enters No10.

Former Labour MP John Woodcock said putting Mr Corbyn in No10 would leave the UK at the mercy of nuclear blackmail from Vladimir Putin.

The Labour leaders comments come a week after Shadow Defence Secretary Nia Griffith was unable to say whether he would ever be prepared to push the nuclear button.

Asked whether he agreed with Chief of the Defence Staff Sir Nick Carter, who last week described NATO as the most successful military alliance in history, Mr Corbyn said: Im not sure Id define it as that.

I would define it as a product of an attempt to bring people together after the Second World War and that we are obviously members of Nato and our voice will be there.

Former Labour MPs warned voters that Mr Corbyns comments today exposed the threat Mr Corbyn poses to the country if he is given the keys to No10.

Ex-Labour MP Mike Gapes warned: Once again Corbyn fails to support Nato. He is not fit to be Prime Minister.
And another former Labour MP John Woodcock, who worked for Gordon Brown in No10 and represented the Barrow and Furness where the new generation of ballistic missile submarines are being built, said Mr Corbyn was a danger to Britain.

He told The Sun: Labours lifelong CND-supporting leader gives the game away on Trident every time he opens his mouth.

It is absurd to suggest a Jeremy Corbyn-led government would continue investing in the nuclear deterrent when hes already rendered it useless by saying there are no circumstances under which he would even threaten to use it to discourage an enemy attack.

Whether it is a pact with the SNP, non-proliferation talks or because the month has the letter r in it, CND Corbyn and his hard left cabal will fall over themselves to find a way to get round Labours fragile defence policy and scrap Trident.

He would leave the UK and its NATO allies at the mercy of nuclear blackmail from Vladimir Putin.

Hollyoaks Stephanie Davis insists shes NOT the Queen Bee on Masked Singer but...