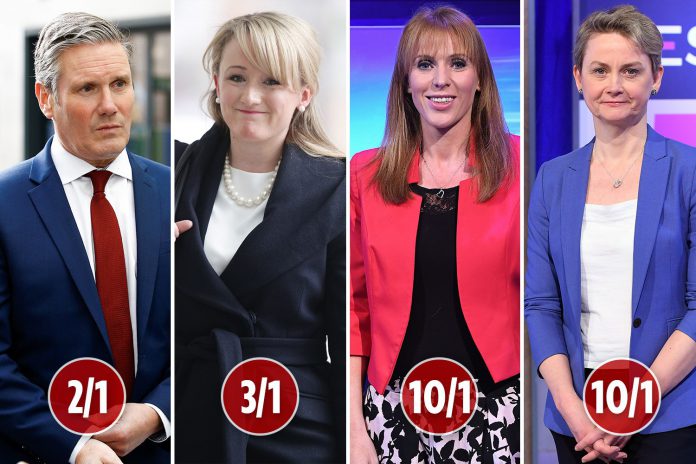 KEIR Starmer is the frontrunner to take charge of Labour from beleaguered Jeremy Corbyn.

There are already calls for Corbyn to resign after tonights 10pm exit poll projected the opposition party to take just 191 seats compared with the Tories 368 seats.

If the exit poll is correct then Jeremy Corbyn looks likely to be gone by the start of January, said William Hill spokesman Rupert Adams.

Rival bookies Ladbrokes has Starmer joint favourite with arch Corbgynite Long-Bailey – with both of them at 3/1.

They then have Cooper at 8/1 and Rayner at 10/1 respectively.

Corbyn’s Labour is set to win just 191 seats, according to the 10pm exit poll

Corbyn’s campaign has been overshadowed by anti-Semitism allegations and his refusal to take a stand on Brexit.

After the disastrous exit poll, Shadow Chancellor John McDonnell told the BBC: “If it is anything near this it is disappointing.”

And he gave a hint that Mr Corbyn could stand down in hours if it were true.

Mr McDonnell said: “Let’s see the results themselves, as I say, the appropriate decisions will be made and we’ll always make the decisions in the best interests of our party.”

“If, as it seems, this was a Brexit election then the next one won’t be given Johnsons Thatcherite agenda.

But a Labour Party spokesperson dismissed the exit poll and said: “It’s only the beginning of the night, and it’s too early to call the result.”

Can I meet more than six people at the pub or in restaurants from...