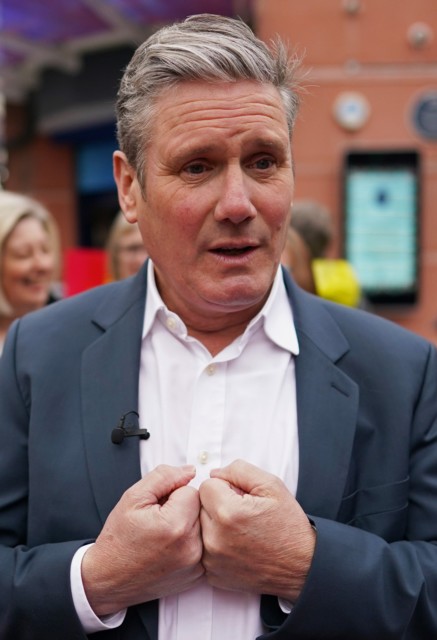 SIR Keir Starmer would have a “very strong incentive” to do a deal with the SNP after the next General Election – paving the way for IndyRef2, the UK’s top elections expert said last night.

Professor Sir John Curtice believes the chance to grab the keys to No10 could mean the Labour leader working with the Nats if there’s a hung parliament.

Under the leadership of Sir Keir and Anas Sarwar in Scotland, Labour has strengthened its support of the Union
Nicola Sturgeon has claimed she plans to hold an indy vote by the end of 2023 And this could set the scene for a referendum sanctioned by Westminster – finally breaking the deadlock over a rerun of 2014.

Strathclyde University expert Sir John’s verdict came despite Sir Keir repeatedly insisting he would not make a post-election pact with Nicola Sturgeon if he falls short of an outright win – as polls have signalled.

He told The Scottish Sun on Sunday: “The crucial aim of the game is do we get a hung parliament in which the SNP holds the balance of power? Then Keir Starmer gets faced with a very tough question.”

He added: “You just have to remember that when a politician gets faced by a choice between being the next Prime Minister and losing the leadership of your party there is a very strong incentive to do the deal that allows you to become Prime Minister.”

Sir John claimed the compromise could be a “multi-option referendum,” adding: “So the Labour party’s offer to the SNP is ‘Ok, we’ll have a referendum in which people can choose between independence and beefed-up devolution’.”

Sir John has previously told he believes the General Election – due in 2024 – will be the next staging post for an independence referendum.

This is despite Ms Sturgeon’s claims she plans to hold a vote by the end of 2023 – a promise stymied by Downing Street’s refusal to back a vote under similar, mutually agreed terms seen before the 2014 referendum.

Under the leadership of Sir Keir and Anas Sarwar in Scotland, Labour has strengthened its support of the Union – with the party north and south of the Border insisting it will not back a referendum.

But, with the chance of a hung parliament Sir John believes the temptation to become the first Labour Prime Minister since Gordon Brown would be too much.

“Voters north and south of the border know that only the Conservatives can be trusted to stand up to the SNP and their self-serving demands for a divisive vote that poll after poll has shown the Scottish people don’t want.”

Ex-PM Mr Brown is currently working on a review for the party which could see Labour support further devolution of powers to Holyrood – but stopping short of separation.

“Labour wouldn’t hesitate to offer the SNP another independence referendum if it meant getting Keir Starmer into Downing Street.

“Voters north and south of the border know that only the Conservatives can be trusted to stand up to the SNP and their self-serving demands for a divisive vote that poll after poll has shown the Scottish people don’t want.”

A Scottish Labour spokesman said: “These comments are a clear reminder that if you want to elect a Labour government you have to vote Labour.

“The Tories and the SNP will spend this election trying to play the same old political games because they have nothing else to say – but Labour have been absolutely clear that we are not doing any deals with the SNP. “We want to bring our country together to build a better future, and we don’t do that by letting the SNP tear it apart.

“It is easy to oppose the Tories, but at the next General Election we need to replace them – and only Labour can do that.”

Did you miss our previous article…
https://www.hellofaread.com/politics/over-7million-of-taxpayer-cash-given-to-groups-fighting-plan-to-send-migrants-to-rwanda/

Danniella Westbrook reveals secret tears for EastEnders co-star as she admits ‘I still get...

Gemma Atkinson transforms her home with Home Bargains Christmas decorations after going all out...