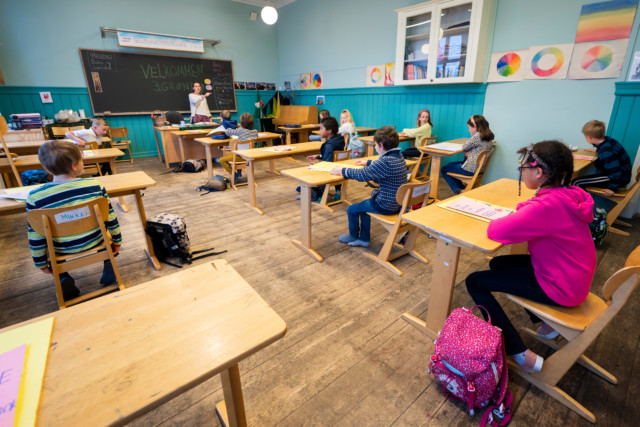 KIDS could be sent to different schools and class sizes cut in half under plan to exit lockdown, it was revealed today.

And all school kids in England will be sent back to class for a month before the summer holidays.

Class sizes will be slashed to no more than 15, and pupils sat apart to try to limit any spread of coronavirus.

If schools don’t have enough resources, parents may have to send their kids to a nearby school instead.

Ministers admit they cannot keep classmates two metres away from each other all day.

So instead these mini classes will be self-contained ‘bubbles’ and not allowed to mix with other kids at the school, new guidelines published tonight say.

Lunch, play breaks and daily drop off times will all be staggered to stop pupils meeting each other outside of their little groups.

Meanwhile, testing will be rolled out to all staff and pupils who show symptoms as ministers try to reassure worried parents that schools are safe.

But kids and staff will not be told to wear protective kit like face masks at school.

And No10 revealed that parents who refuse to send their kids back to class will not be slapped with the usual £60 fines for non-attendance.

Boris Johnson yesterday told MPs: “There will be change, the environment will be different in our school settings but that doesn’t mean they should be closed down forever.

“We will be gradually, if we can make progress, restarting in June.”

But teachers unions branded the plans “reckless” while some headteachers have already begun writing to parents saying they will refuse to reopen in June.

The government’s blueprint for easing the lockdown, published earlier today, said all primary school kids will get a month back at class before the summer “if feasible”.

Primaries are expected to start reopening from June 1 with nurseries, reception, Year 1 and year 6 pupils allowed back first.

While secondary schools will open their doors for Year 10 and year 12 pupils who have exams next year.

Amid a furious revolt from teachers opposed to a return to schools, ministers have scrambled to radically transform schools for the new Covid era. Classes will be done outside wherever possible, schools regularly deep cleaned and one way corridors introduced to try to slash contact.

If a pupil or teacher gets symptoms they will be immediately sent home, told to self-isolate and tested.

If they test positive then the rest of their class will also be sent home, told to self-isolate and tested.

Nannies and child-minders will also be allowed to head back to work – freeing up parents to get back to the office too.

But many worried parents are threatening to not send their kids back to class at all.

A petition set up by mum Lucy Browne calling for parents to be allowed to not send their kids back has been signed by a whopping 420,000 people.

And hardline teaching unions are in open revolt at the plan for schools to gradually return.

Mary Bousted, joint general secretary of the National Education Union, said it is “not safe” to reopen schools.

“Heads have been inundated with questions and queries from their staff and from parents.

“The Government has stoked teachers’ anxiety and triggered real confusion because the announcement is inconsistent on the importance of social distancing and how or whether it can be achieved in schools.” But Tory MP Robert Halfon, chairman of the education select committee, warned England faces a “decade of educational poverty” unless it gets kids back to class.

He told HOAR: “As long as the science allows it and teachers are protected, then kids should go back to class where possible.”

Rishi Sunak says he wants to CUT taxes – but only after repairing Covid...