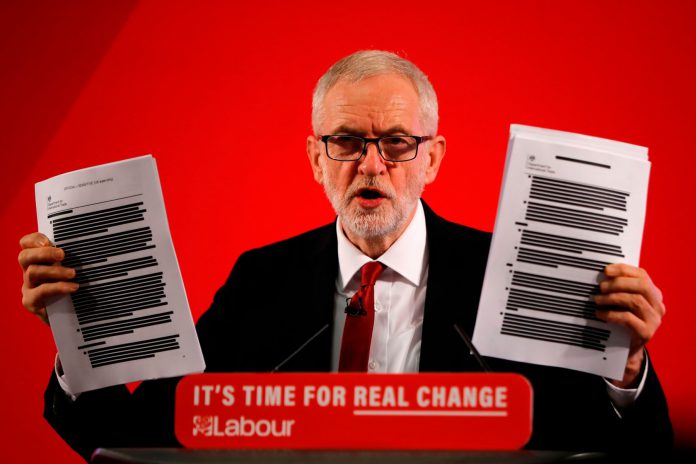 KREMLIN spooks behind the leak of Jeremy Corbyns NHS dossier also spread fake news about an alleged assassination plot on Boris Johnson, a probe has found.

Reddit accounts connected to the publishing of secret government documents were responsible for a long disinformation campaign.

It comes after the Labour boss brandished unredacted UK-US trade negotiation documents at a press conference last month, after they had been posted anonymously on Reddit in October.

Mr Corbyn claimed to have damning evidence that the NHS was up for sale in a trade deal as he waved hundreds of pages of leaked documents.

Reddit said last week that it believed Russia was behind the leak of the dossier Mr Corbyn touted and later dished out to reporters.

The other profiles, now suspended, targeted the UK for a number of years – spreading fake news about a potential attack on the PM from anti-Brexit extremists and lies about the Real IRA attempting to recruit Islamic extremists, a Storyful investigation has claimed.

In August 2018, a banned account, under the name of chavezserg, shared a letter purporting to be from Josep Borrel Fontelles, then the Spanish foreign minister, claiming that Johnsons life was under threat.

The document was shared multiple times on Reddit by the account. But it was found to be fake in June this year.

Other accounts were found to be publishing claims that the Real IRA was recruiting Islamic extremists and planning to target the British state.

The falsehoods were made in fake letters between EU chief Michel Barnier and DUP leader Arlene Foster.

Both were found to be false by previous reporting from the Atlantic Council-backed DFR Lab.

It was also revealed that the suspended accounts carried out coordinated campaigns related to Ukraine and political opponents of Russian President Vladimir Putin.

One of the profiles, called BillieFolmar, shared an article on Reddit in 2017 claiming Ukraine was on the brink of a nuclear disaster.

The article was subsequently shared under the same username across numerous fringe and blogging sites, including Ground Report, a citizen journalism website, and to LiveJournal, a Russian social networking service.

A suspended account, under the name of zurabagriashvili, shared an article claiming Mikheil Saakashvili, the former president of Georgia and a Putin critic, was behind anti-Russian protests in Georgia.

It also shared an article that claimed to show a leaked letter in which Saakashvili asks for Turkeys assistance in elections.

The article with the alleged leaked letter was shared across dozens of Russian websites, as well as sites in Ukraine and Moldova.

UK economy shrinks by 20.4% in April – the biggest monthly fall on record

Over 80,000 sign petition to block Tony Blair receiving a knighthood